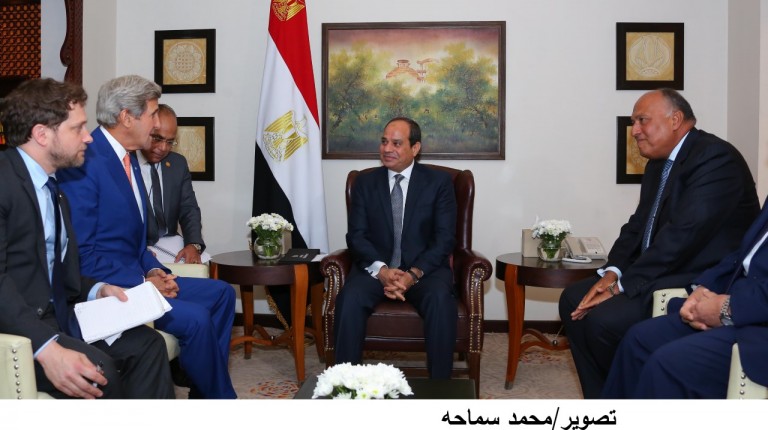 President Abdel Fattah Al-Sisi met with the United States (US) secretary of state John Kerry in New Delhi on Thursday evening, as both officials’ visits to the Indian capital coincided, according to the presidency spokesperson Alaa Youssef.

Al-Sisi stated during the meeting that Egypt is looking forward to advancing its decades-long strategic relations with the US and to enhance the cooperation on various levels to fulfil the common interests of both countries.
The president also confirmed the significance of the continued consultations and coordination between the two countries over regional issues and developments, which enables the confrontation of various challenges in the Middle East.
Meanwhile, Kerry said that the US highly values its partnership with Egypt, and looks forward to strengthening the bilateral cooperation. He also confirmed that Egypt has a significant role in the Middle East, considering it an essential supporter for security and stability in the region.

He additionally confirmed that the US is committed to support Egypt’s stability, and added that consulting with Egypt on various regional issues contributes to achieving stability in the region.

The meeting addressed the situations and latest developments in different countries in the Middle East, especially those facing unstable conditions, such as Syria and Libya. The officials also discussed international efforts to reach a political solution to restore peace and stability in the region.