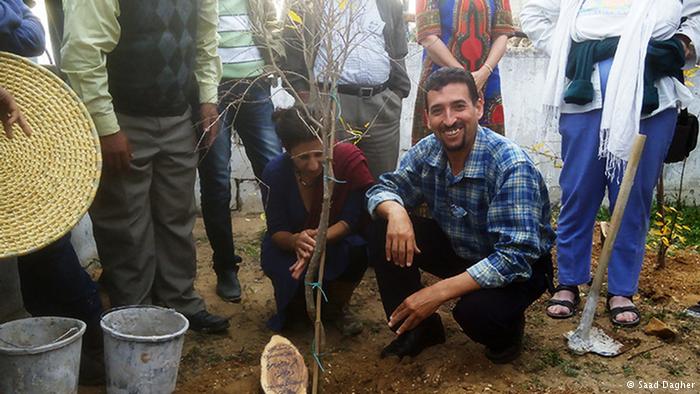 A zero-waste, food-producing, nature-harmonizing way of life in Palestine’s villages has been the subject of one man’s dreams for over 15 years. Now, they are coming true.It was back in 2012 that agronomist, environmentalist and seasoned yoga instructor Saad Dagher finally identified the community that is to become Palestine’s first eco-village: Farkha.

Located in the Salfit Governorate in the West Bank and home to 1500 residents, 30 cows and 3500 sheep and goats, it is being turned into a place where inhabitants live in harmony with nature and maintain social and cultural structures that are supportive of individuals as well as of the community.

Dagher’s interest in green agriculture was sparked in 1996 when he served as director of the Ramallah branch of the Palestinian Agricultural Relief Committee (PARC). Initially, he focused on a return to a once rich agricultural heritage.

Traditionally Palestinian villages were known for their particular produce – be that figs, grapes or apricots. And in 1997, he began experimenting with raised beds on his family’s land. He was aiming for high-yield food production, but as he was a novice, food production remained low.

These days, he freely admits he didn’t know what he was doing. But he learned, and in 2003, went on to develop high-yield beds at schools and homes across Palestine. That success inspired him to advance his agro-ecology, which he defines as agriculture that operates in harmony with nature to produce good food for people and animals while protecting available natural resources.

A decade on, he had gained enough experience and courage to turn his eco-village dream into reality. Farkha, which was chosen for the community’s history of activism and mobilization, is now well along the road to transformation.

An educational ecological garden of 1.5 hectares is being created, as are home gardens to support 15 families. The community has also begun to renovate selected historic buildings to serve as cultural and community centres as well as to host visitors, and they have launched experiments to reduce waste leaving the village.

Dagher explains that the community is also developing a ‘food freedom belt’, which will see the entire village periphery become a food production site. The belt will be initiated with the help of seed balls, which as the name suggests are balls of soil and dirt containing various perennial and annual seeds, that will grow produce to nourish the community.

And that’s not all. Preparations are underway to develop a biogas system that will use kitchen waste to generate power, and containers have been distributed to residents in the village so they can home compost as well.

Over the course of this year, the organizers will also begin to experiment with solar energy, which they hope will eventually power the whole village, and water retention mechanisms, which Dagher explains can save 80 percent of rainfall. Techniques include mulching with straw, paper, leaves or rock, building terraces, and digging swales.

Besides being of huge benefit to the environment, Dagher says initiatives such as Farkha play another vital role in the future of Palestine.

“The eco-village model will ensure our freedom and autonomy over our food sourcing,” he said.

Which is why, once the Farkha model has been established, Dagher plans to expand it to surrounding villages.

Reproduced and condensed with kind permission of the Goethe-Institute Ramallah as part of the FUTUREPERFECT project.

If you are also #doingyourbit for the environment, get in touch at doingyourbit@dw.com and tell us about it. We will publish your story here.