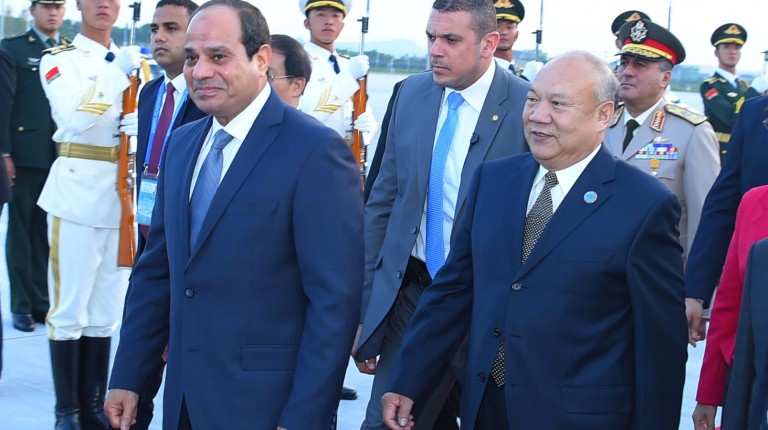 President Abdel Fattah Al-Sisi arrived in China on Saturday to attend the G20 summit, taking place in Hangzhou from 4-5 September.

This year’s theme for the summit is working “towards an innovative, invigorated, interconnected and inclusive world economy”. The G20 summit will focus on building an inclusive global economy, international governance, and economic development and innovation.

The summit will see discussions on six main topics among at least 25 country leaders, including trade investments, infrastructure, small- and medium-sized enterprises (SMEs), and fighting corruption.

Al-Sisi is participating in the summit for the first time since he was appointed president in June 2014, upon an invitation from the Chinese president Xi Jinping. The previous G20 summit was held in Turkey in November 2015.

“We should strive to build an innovative, invigorated, interconnected, and inclusive global economy and explore new ways to drive development and structural reform,” Jinping said in December 2015 ahead of the G20 preparations.

He added: “China will work with all other parties to pull in one direction in the spirit of win-win partnerships.”

Preceding his visit to China, Al-Sisi signed several maritime agreements with India during a short visit there.

Egypt and India also agreed on a military and security cooperation, especially in terms of counter-terrorism measures. Additionally, the countries decided to strengthen cultural and touristic ties, as well as scientific and technological cooperation, particularly in the areas of renewable energy, information and communications, and space technology.