International creditors are on a tour of the Middle East and North Africa, preaching that the keys for development and prosperity are the implementation of free market liberalisation that will usher in an age of global cooperation. While the world’s biggest consumer market, the US, was the most powerful economy, this may have been plausible. However, now that political considerations have zoned in on China’s rapid rise, a wave of protectionist and discriminatory measures have begun to define the world economy, says a new Global Trade Report (GTR) titled “FDI Recovers?”, an analysis of the current discussion and policy framework in the G20 summit, which meets this week in Hangzhou, China.

The GTR analyses the stagnation in global trade, depressed growth rates, and the shift from trade liberalisation as well as the G20’s contribution to that recovery, and the coherence of policy so far. They found that trade protectionism and anti-free market policies from richer nations are the culprit for depressed growth, implementing 350 trade restrictive measures in the first eight months of 2016.

UNTAD stated that foreign direct investment (FDI) has reached a post-crisis era peak and has seen less investment to G20 economies than other nations. GTR found that global spending on investment has actually decreased and FDI no longer contributes as much to global growth as it had, despite its increasing levels in nominal terms.

This has been due to increasing levels of trade protection against other G20 economies, which in turn affect world economic growth. Since 2008, 4,000 trade barriers and discriminatory incentives have been implemented by the G7+Austrailia and BRICS, which severely distort FDI gains.

The report disproves claims by policy makers that the spike in protectionism in 2009 was gradually being phased out and brought under control through self-restraint, monitoring by international organisations or multilateral rules, and decision-making by organisations like the G20.

The main countries who have seen the biggest degree of restrictive trade policies have been Australia, France, Germany, Italy, Saudi Arabia, the UK, and the US. 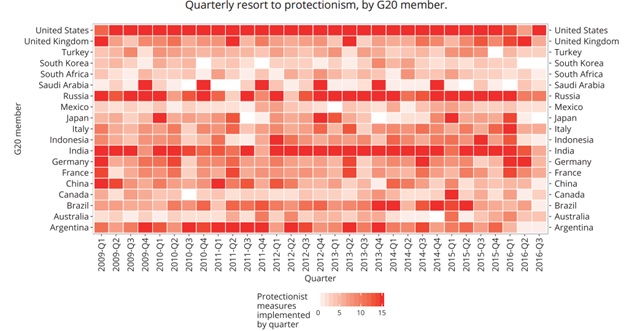 As trade protection sees “harm being done more frequently to the non-G20 nations”, this has a major effect on Egypt, not to mention the decrease in global trade and cheap oil has had a profound effect on Suez revenue. For example, Saudi Arabia’s protection has, in the view of GTR, less to do with promoting exports and “better reflects its propensity to discriminate against foreign commercial interests”, which greatly affects Egypt.

Of the total amount of protectionist measures, the US has enacted almost 1,050 unfair practices. GTR notes that “the [act of] resorting to protectionism appears more sustained than in [Russia, India, and Argentina]”. The majority of the US’s trade distorting has increased levels of subsidies and tax incentives to multi-national corporations.

The GTR acknowledges that China has been the country harmed most by the trade protection measures, even amongst its fellow BRICS countries, while the US anti-free trade policies severely target China. While these polices do have a global fall out in depressing growth and trade, they are crafted “surgically” and precisely target industries or firms connected to China.

As China is becoming the world’s biggest industrial and consumer economy, western nations and multinational corporations grow increasingly panicked over China’s economic pre-eminence. This will be the heart of what is discussed at the G20 summit on Monday.