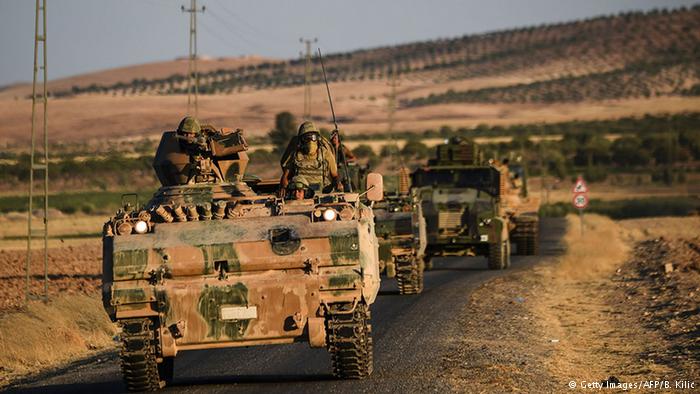 Turkey has launched a new effort to back rebels in northern Syria. More tanks crossed into the war-torn country to help opposition fighters battling the so-called “Islamic State” (IS).
Turkey increased its military presence in Syria on Saturday, sending tanks into the Cobanbey district to back opposition fighters combating IS.

Last month, Ankara launched “Euphrates Shield,” its first cross-border operation since the start of Syria’s civil war. Though ostensibly an effort to help members of the Western-backed Free Syrian Army (FSA) take back control of the city of Jarablus from IS fighters, critics accused President Recep Tayyip Erdogan of using the operation as a pretext to prevent Syrian-Kurdish fighters from gaining ground.

Since then, FSA rebels have been seizing other towns around Jarablus. FSA units are also fighting the US-backed Kurdish People’s Protection Units, or YPG, which Ankara considers terrorists.

Turkey’s most recent incursion came when around 20 of its tanks crossed from the Turkish border town of Elbeyli into the village of al-Rai to support rebel fighters. Ankara also sent a host of other armored vehicles into the area in addition to tanks, AFP news agency reported.

The aim of the offensive is to push back “terror elements” from the last stretch of border known as the Azaz-Jarablus line, the official Anadolu News Agency reported.

Saturday also saw reports of FSA fighters taking control of other villages in the area, including Fursan, Lilawa, Kino and Najma, effectively closing the gap on the disputed border region claimed by IS. The Syrian Observatory for Human Rights, a UK-based monitoring group, confirmed that members of the FSA had gained ground in the area.

Turkish officials also reported that three rockets fired from IS-held territory had struck the Turkish town of Kilis, not far from where the tanks had left to cross into Syria, the Associated Press reported.

Kilis has been a frequent target of rocket fire from IS over the past year. Shortly before its cross-border operation in August, Turkish forces along the border traded fire with IS militants after a round of rockets targeted towns along the border, including Kilis.