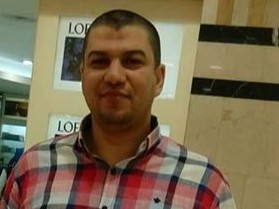 Human rights organisation Alkarama said in a report on Monday that it referred the case of Mohamed Sadek, a lawyer who disappeared on 30 August, to the UN Working Group on Enforced or Involuntary Disappearances (WGEID).

Sadek disappeared when he was heading to the Giza railway station. He is allegedly detained and his whereabouts remain unknown. Authorities are refusing to give any information pertaining to Sadek, according to Alkarama’s report.

The Front to Defend Egyptian Lawyers (FDEL) launched an online campaign on Friday to call for the release of Sadek. FDEL said that Sadek has been defending prisoners in the notorious maximum security Al-Aqrab prison in Torah.

Alkarama’s report read that Sadek was heading to the railway station with his relative. They were both “abducted”, but his relative was later released. The authorities have refused to give any explanation to Sadek’s family, thus this case is deemed an enforced disappearance.

Alkarama’s regional legal officer Simone Di Stefano said: “We are extremely worried when it comes to such cases, which unfortunately do not constitute isolated episodes, as the disappeared individuals remain extremely vulnerable being often subjected to torture and not benefitting from any judicial process whatsoever.

Alkarama concluded its report by saying that it alerted the WGEID to promptly intervene and demand information about Sadek from the Egyptian authorities, and to investigate all the reported cases of enforced disappearance.

Alkarama has been extensively documenting these disappearances in Egypt over the past few months. Sadek is the latest lawyer added to the list of those who have been forcibly disappeared in Egypt.