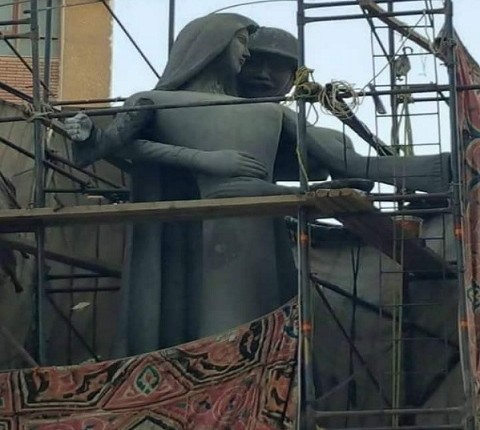 A statue of a woman, gazing into the horizon, dressed in a long-sleeved dress and wearing a head scarf, being tightly embraced from behind by a soldier, his arms around her waist─that was the final spark that added to mounting furor against a series of hideous public statues set up in Egypt’s streets.

The statue is called ‘the mother of the martyr’ and is located in the Martyr Square in Balyana city, Sohag governorate, in Upper Egypt. It, supposedly, represents Egypt as an old lady standing strong, protected by military soldiers who would die for her. However, the statue’s implicated innuendo is miles apart from the message it was supposed to convey.

‘The mother of the martyr’ sparked a huge controversy, initiated by the conservative residents of the area, expanding further and going viral on social media. People accused the sculptor of portraying a sexual harassment scene, in which the male forcibly holds a woman from behind.

The statue was also confronted with irony by social media users, saying that it represents Jack and Rose’s most famous scene from the movie Titanic. Others said that the statue insinuates that Egypt only stands strong due to the military martyrs who had died for the country, without mentioning the people who lost their lives during the 25 January Revolution and the following clashes until today.

Sculptor Wagih Yanni defended his artwork by saying that the statue is still in process, asking people not to judge until they see the final version of it.

“The martyr is holding his mom. There’s nothing wrong with that,” Yanni said on a talk show aired on a private TV channel. “The angle the picture was taken from was wrong, which is why people have been criticising it.

“I’m still working on it. How can people judge the statue based on one picture taken by a random person?” he added.

The 8.5 metre tall statue cost EGP 200,000. Yanni also stated that, from an artistic point of view, he had to portray and pose the martyr that way, because his hands were the connection that evenly distributed the weight of the statue.

“The lady’s figure is a full body over the ground, while the martyr’s figure is technically only a head. So I had to figure out a way for the head’s weight to be supported, and that was through the embracing arms,” Yanni added.

In another interview with Associated Press, Yanni said that “sometimes, an artist’s vision clashes with the culture of society,” adding that “if our objective is to treat citizens with respect, then we must not do anything to offend their feelings. We all respect our army and country.”

Sohag’s governor, Ayman Abdel Moneim, ordered to investigate the incident, asking Yanni to apply the needed changes, so that people would like it. Yanni started the modifications in which he will change the position of the martyr’s hands over the mother’s body. He will also place a peace dove into her hands.

On the international level, the Associated Press found the statute “scandalising” Egyptians. While Yanni started amending the statue, he still finds it quite satisfying without any irritating intentions. “I remain convinced of the sculpture’s original idea and the modifications will not steer far from that,” he told Associated Press. “But I personally feel that it’s important to me that everyone is happy with the sculpture,” he added.

Sculptor Azza Abdel Moneim said that the main problem with the statue is that it displays Egypt as a vulnerable, weak woman that always seeks protection, and would otherwise fall apart. “This is not the truth. It is not the truth about women, nor Egypt. Both are much stronger than this image,” Abdel Moneim told Daily News Egypt.

From an artistic point of view, Abdel Moneim finds the sculptor portrayed Egypt with the most common, uncreative image, “which is the miserable women dressed in a long, wide abaya,” explaining that “this vision is the furthest thing from creativity”.

“Moreover, the position of the man while he’s holding the woman from behind doesn’t represent safety. He doesn’t look like he’s protecting her, but more like he’s raping her,” she stated. “As a sculptor and a normal citizen, the statue scares me more than it assures me.”

‘The mother of the martyr’ is not the first of distorted, bad-looking statues in Egypt. A few months ago, people woke up surprised by the renovation of the Um Kolthoum statue in Zamalek. The statue, which was made by famous sculptor Tarek El-Komy, was painted dark green, and Um Kolthoum’s skin was coloured in brown, making her look like a dark-skinned person.

The restoration of the statue was supposed to make it look more attractive, but it resulted in the glorious Um Kolthoum being made to resemble Viola from the movie Shrek.

“The government spends fortunes, not only on making horrible statues, but also to distort the already beautiful statues,” Abdel Moneim said. “As a sculptor, I can assure that the mother of the martyr statue did not need EGP 200,000 to be made.”

The statue of composer and singer Abdel Wahab in Bab El-Sha’reya was another victim of the hideous renovation. After it was originally created in dark elegant marble, the skin of the great musician was coloured in pale gold, while his suit was painted dark brown, leaving the sculpture looking like a funny cartoon character.

“It’s like someone is intentionally trying to misrepresent the only beauty left in the country─both old and new sculptures,” Abdel Moneim concluded.