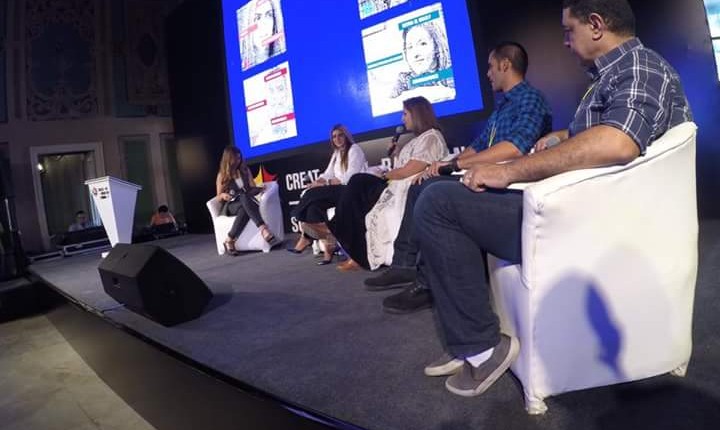 Aiming to discuss creativity in advertising, drama, and digital marketing campaigns during the month of Ramadan, the creative industry summit launched its annual special event on 5 September. The summit aims to bring together large numbers of professionals in the business and creative industries in Egypt by targeting six key areas, including advertising, art and design, film, radio and television, photography, business innovation, and music. The Ramadan edition opened the door for discussing creative ideas in advertising, drama, and e-marketing campaigns, and shed light on current challenges.

The event started with some quick sessions that gave an overview on advertisement spending during Ramadan and the importance of utilising Egyptian monuments for promoting certain brands. The first panel discussion included a large number of professionals who represented seven of the largest working companies in different sectors in Egypt, including Mindshare Cairo, PAM media services, Orange Egypt, P&G Mena, Animation advertising, Paramount Media, and Core Republic. The panelists discussed the importance of Ramadan for the marketing fields and focused on the wide range of competitors they have to take into consideration.

The session that followed paid special attention to the creative awareness campaigns that were held by non-governmental institutions last Ramadan. Heba El-Swedy, the founder of Ahl Masr foundation, the first non-profit charity specialised in treating burn injuries, was interviewed in a session entitled “Creativity in Social Corporate Responsibility”. She explained how she wanted to think outside the box on ways to grab people’s attention about the large number of burn victims and how to treat the patients afterwards.

“We found out that about 100,000 cases of burn injuries take place [every year] and only 40% of them are able to survive. Unfortunately, the hospitals refuse to host such patients and that’s why we thought about establishing the first non-profit specialised hospital for treating burns in the MENA region,” El Swedy said.

To help bridge the gap between the burn patients and the public and encourage people to accept them and integrate them into society, El Swedy decided to think of an innovative advertising strategy.

“We launched a campaign on the internet called ‘See it with your heart’ that included a song in which we encouraged people not to avoid looking at the patients’ faces. In this song, we used colours as a metaphor and coloured the faces of the children and the celebrities who participated in the song such as Aser Yassin, Bushra, Amina Khalil, and many others,” she added.

Although the song was only broadcast on social media, she was surprised by the outstanding success it managed to achieve. “The campaign positively influenced the donations,” she noted.

Nesma El Shazly, executive producer at Kharma works, explained how she wrote the lyrics of the song and how they cooperated with the well-known composer, Hisham Kharma, for the finishing touches. Kharma expressed the importance of mixing charity and arts and involving artists to help engage people and change how they look at burn patients.

Tamer Alphonse, an industry manager in Google, then gave another interesting talk about online advertising and the ways of introducing new creative approaches to grab the audience’s attention. He shed light on how the increasing rates of downloading ad blockers can lead to a huge loss of revenues for advertisers and pose a major threat.

Within the same context, representatives from Mandolin company explained how they came up with a creative advertising idea by utilising consumers’ comments on social media. With a funny presentation, they presented the steps they followed to make a successful campaign at the lowest cost.

Two other panel discussions were allocated to discussing Ramadan TV shows. The panelists, producer Mohammed El-Adl, director Omar Abdel Aziz, and script writer Tamer Habib, discussed the crucial issue of censoring artistic works and creative arts in Egypt. They explained the importance of eliminating any restrictions on the freedom of expression.

The next panel discussion included a large number actors, including Anoshka, Mai Omar, Engy El Moqadem, and Samar Morsi, along with the remarkable Mohammed Mamdouh, whose role in the Grand Hotel series put the spotlight on his outstanding talent.  The panelists discussed the power off group acting and how it enables artists to produce more interesting artistic works. A long discussion was opened following the session to provide a chance for audience members to express their opinions before the event concluded.

The next round of the creative industry event will be held in April and will run for two days.

Campaign to promote tourism to be launched in October: JWT executive chairman