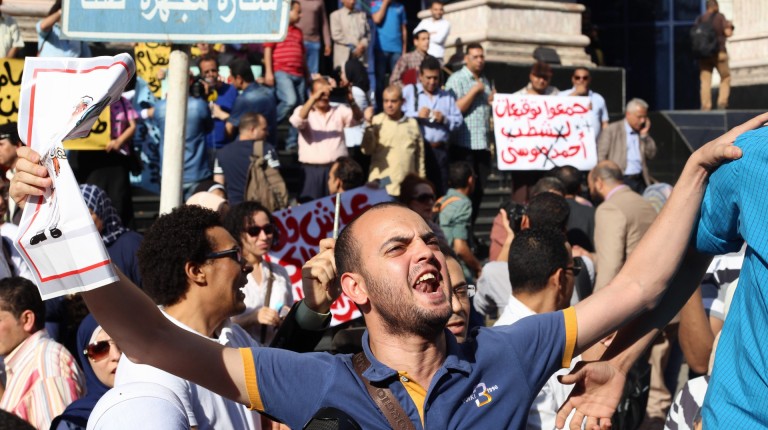 The first half of 2016 was the worst in terms of freedom of expression, press, and media under the rule of President Abdel Fattah Al-Sisi, according to the Association for Freedom of Thought and Expression’s (AFTE) quarterly report issued on Tuesday.

Tension and hostility in the relations between authorities and the press has reached unprecedented levels, the report read. AFTE referred to the incident in May when security forces stormed the Press Syndicate headquarters to arrest two journalists, as well as the trial of three syndicate leaders including the head of the syndicate Yehia Qalash.

AFTE’s report began with the severe crackdown on the freedom of the press and media, saying that many journalists were not allowed to do their jobs and were terrorised by arrests and physical assault.

On 4 April, the general prosecution summoned Khaled Al-Balshy, head of the syndicate’s Freedoms Committee and editor-in-chief of privately-owned news outlet Al-Bedaiah. He was accused of publishing stories that aim to topple the regime and incite people to protest, among other charges.

Two days following this summoning, the Ministry of Interior backtracked on the complaint it filed against Al-Balshy, instead stating that it appreciates the Press Syndicate and the important role of the press and journalism in defending Egypt.

When Al-Sisi signed the maritime demarcation deal between Egypt and Saudi Arabia over the sovereignty of Tiran and Sanafir islands, thousands of protesters took to the streets in opposition to the agreement. According to the report, there were about 36 violations against journalists and reporters who were covering these protests.

On 23 April, security forces raided the private residences of journalists Amr Badr and Mahmoud Al-Saqa. The journalists’ belongings were confiscated and they were later arrested from the headquarters of the Press Syndicate when security forces, for the first time, stormed the syndicate.

Journalists and activists denounced the incident and organised several protests; they demanded the dismissal of Interior Minister Magdy Abdel Ghaffar and a presidential apology for the incident.

The report said that the storming of the syndicate and its aftermath, including leaders of the Press Syndicate standing trial, is an obvious act of hostility from the regime towards journalists.

Creativity and satire are standing trial

Journalist and novelist Ahmed Nagy was arrested and charged for publishing a chapter from his book The Use of Life in Akhbar Al-Adab. The allegedly “obscene sexual content” saw him arrested on charges of violating public morals and general ethics. The report considered Nagy’s arrest to be unconstitutional, as freedom of expression is supposedly a main pillar of the Egyptian Constitution and a basic right granted to everyone. Nagy appealed his arrest but the court rejected the appeal.

The report added that the arrest of Street Children band members is yet another form of sensitivity on the part of the authorities towards satire. The band members published satirical videos online, in which they commented on ongoing political events and leaders, including Al-Sisi.

The band members’ detention was renewed for the 10th time on Monday. They filed two appeals but both were rejected.

Choosing the next UN chief is ‘intensely political’