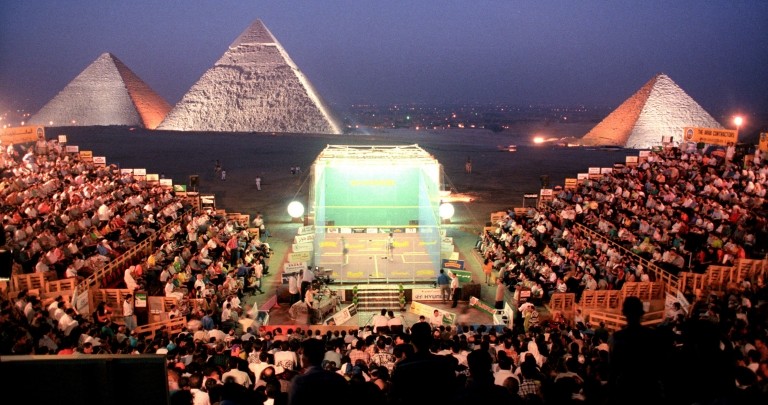 After an absence of ten years, Al-Ahram Squash Open will take place on 17-23 September.

This tournament was founded in 1996, and was the idea of famous writer Ibrahim Hegazy.

This year’s tournament will include men and women competitions, with prize money reaching $200,000.

Mansy is a former squash player who was also the trainer of the Egyptian national squash team. He had the idea of establishing El-Gouna Squash Open in 2010, and was also its director. Given his experience in organising international tournaments, he was chosen to direct and organise Al-Ahram Squash Open.

The tournament was mainly revived in order to help Egypt’s tourism recover. For the first time, the Egyptian Tourism Development Authority is preparing a marketing and promotional plan for the event.

The tournament will be held at its signature spot: the Pyramids of Giza. In this regard, the Minister of Sports and Youth Affairs, Khaled Abdel Aziz, worked on solving administrative issues to ensure the smoothness of the process.

Organisers and leading figures in Egypt’s squash and tourism scenes held a press conference on 6 September to announce the tournament.

During the conference, managing director of the Egyptian Tourism Development Authority Samy Mahmoud stated that through these sports and cultural events, Egypt could refute rumours and recover its reputation as a safe and enjoyable tourist destination. “We hope that by the end of 2017, the number of tourists will reach 10 million. It is a small number for a country like Egypt, but a big number compared to the circumstances we are facing,” he added.