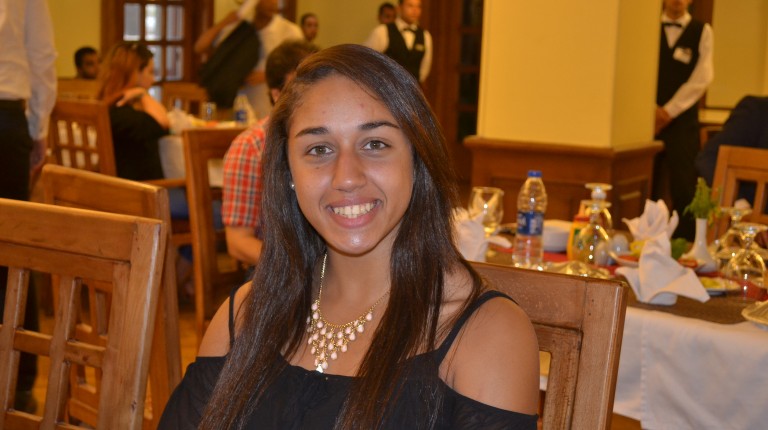 On 5 September, Gezira Sporting Club (GSC), under the presidency of Assem Abbas, held an event to honour its players who participated in Rio’s Summer Olympics.

The aim of this honouring ceremony was motivating and preparing the champions for the Tokyo Summer Olympics 2020.

The event was celebrated to honour equestrian champion Karim El-Zoghby, and members of the Egyptian national synchronised swimming team Dara Hasanein, Nehal Safaan, Nada Safaan, and Samia Hagras, all of which are member of GSC. The team obtained the seventh place in Rio.

Additionally, the youngest participant of the Egyptian delegation in Rio Haidy Adel was also honoured. At only 16-years-old, Adel is an international modern pentathlon champion, who showed an outstanding performance in Brazil.

Daily News Egypt sat down with Adel, who will participate in the World Modern Pentathlon Championship to be held at the Cairo Stadium. How did you get involved in the pentathlon discipline?

I started swimming at the Police Club when I was around six years old. I was then informed that swimming is one of the five events of the modern pentathlon. Afterwards, when I was around eight-years-old, I started to train for running, besides continuing swimming.

When was your first championship?

I was nine-years-old when I participated in a national championship which included only two disciplines: running and swimming. I came in fourth place. This was a great motivation for me.

Poland’s Marek Makay, who was the technical manager of the Egyptian modern pentathlon team, was impressed by my performance and wanted me to join the Egyptian team. However, the only obstacle standing in the way was my young age. He was a great support for me.

How did you get to join the Egyptian team?

I joined the Egyptian team through national championships in swimming and running. I was ten-years-old at the time.

Can you tell us about your international participations?

How did these victories influence your sports career?

When I was satisfied with my performance in swimming and running, I started to practice two other disciplines of the modern pentathlon, namely fencing and shooting.

Tell us about your participation in the Youth Olympics?

The first eight players at the World Championship qualify for the Olympics; thus, I took part in the World Championship in Hungary. It was my first time to play a world championship that includes four disciplines of the modern pentathlon: swimming, running, fencing, and shooting. I finished in sixth place, and this is how I became qualified to the Youth Olympics, which only includes four disciplines of the modern pentathlon. It was a great surprise for me, my family, and the Egyptian Modern Pentathlon Federation.

How was your rank at these Youth Olympics?

When did you start equestrianism?

It was after I returned from China. I set eyes on the Rio Summer Olympics this year, so I had to work on and practise the fifth discipline of the modern pentathlon.

At the beginning of 2015, the Egyptian Modern Pentathlon Federation sent me to an equestrianism camp in Geneva, Switzerland.

When was your first championship that included the five events of the modern pentathlon?

After I returned from Switzerland in 2015, I participated in a national championship. At the equestrianism event, I passed with a clear course, which means that I completed the round without additional time or errors.

What about the rest of your victories during 2015?

In the same year, I participated at the World Cup, which took place in Egypt. It was my first time to participate in an international equestrianism event, where I passed with clear course.  Cumulatively in all disciplines, I came in 22nd out of 90 participating female athletes.

Afterwards, at the World Cup in Hungary, I jumped from the 22nd place to 15th.

Also in 2015, I participated in a mixed championship, which means that a female and a male player participate, and are evaluated according to their cumulative score. My partner was international Egyptian champion Amr El-Geziry. In the World Cup in Italy, we got the silver medal. Gold and bronze went to China and Korea, respectively. It had been years since an Egyptian mixed team acquired a medal.

I also won the silver medal at the World Championship in Argentina.

Thanks to my results and accumulative points, I qualified for the World Cup Final 2015, Belarus. I came in 22nd.

How were you qualified for the Rio Summer Olympics 2016?

It was through the African Qualifier Championship in Egypt in 2015. My strongest competitor was Egypt’s Aya Medany, who was leading at the beginning of the championship. But in the end, I won the championship, and this is how I qualified for the Olympics.

How did you prepare for the Olympics?

It was a long journey. I participated in the World Championship 2016 in Ireland. Then I went to a camp in the US for 10 days. Afterwards, I travelled to Rio de Janeiro, for another 10-day camp.

How did you perform at the Olympics?

It was all fine, up until the equestrianism event. The horse I was given after the lot jumped in the first and second sets, but refused to jump in the third set. The horse had thrown me off, and while I was still holding on to it and attempting to complete my third set, the bell rang, which led to zero points at the equestrianism event. Thus, I lost 300 seconds, meaning losing 300 points.

What do you think about the reaction of Egyptians towards the Egyptian players who failed to obtain medals at the Olympics?

A lot of reactions were very aggressive. These people neither understand, nor appreciate the hard effort that we do. I recall an incident where a Facebook page published my photo while I was falling from the horse and used abusive language in the post.

I just want to clarify that, according to the game’s ethics and rules, I have to reach the finish line on the horse. Even if I get zero points and lose, I have to exit sitting on top of the horse. So I had to hold on to the horse to ride it again.

The photo received abusive comments, criticising that I was holding on to the horse, but these people do not understand the game’s rules.

These people do not understand the fact that we train from 5am until 11pm. We exert a lot of effort to balance between our sports career and academic or work careers.

If I fall from the horse, this does not mean I am a failure. A Lithuanian champion at the Olympics had to ride on the same horse and it did the same with her, refusing to jump, although she was a gold medalist at the London Summer Olympics 2012.

I just want these people to appreciate our effort, and be supportive rather than destructive.

Brazil gears up for 2016 Summer Olympics