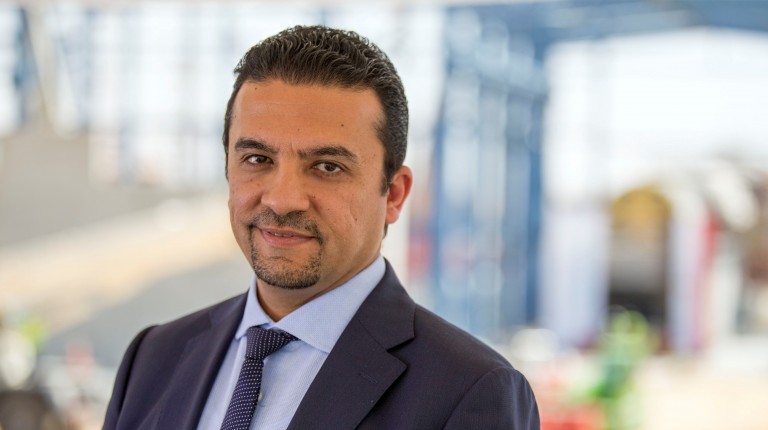 Daily News Egypt interviewed Emad Ghaly, CEO of Siemens Egypt, to talk about the updates and progress of the company’s power plants in Egypt.

What are the latest updates of your three power plants—Burullus, New Administrative Capital, and Beni Suef—in Egypt?

Step by step, we are moving forward towards a fundamental increase in Egypt´s electricity production. We are working at a fast pace to help the Egyptian people overcome power shortages as soon as possible. The goal is to start the first power plant in Beni Suef in December, while Burullus and the New Administrative Capital are expected to run in January 2017. Currently, all three gas-fired power plants are under construction. We are working together with our local partners Elsewedy Electric and Orascom Construction. As of July 2016, 50.8% of the Beni Suef project was completed with more than 5,000 workers on-site. Burullus is 46.2% complete with more than 6,000 workers on-site, and 34.4% of the New Administrative Capital project was established with 3,000 workers.

We are constantly ramping up manpower at the construction sites. As for the equipment, already 11 H-class gas turbines are being delivered to Egypt, together with all related auxiliaries and generators.

New Capital: All heavy equipment like gas turbines, generators, and transformers are delivered by vessels to Sokhna or Adabiya ports, and transported by truck to the site. The main challenges are the weight, dimensions, and the quantities of material to be handled in a very short time. Also, the availability of transport means has to be very well organised, given the amount of mega projects that are currently being simultaneously executed in Egypt.

Burullus: All heavy equipment, like gas turbines, generators, transformers, and heat recovery steam generator modules are delivered by coaster vessels to the Burullus port. Respective enhancement works of the port’s infrastructure are progressing as scheduled. General cargo is delivered via Alexandria port to the Burullus project site. The challenge is the vast amount of shipments and quantities to be transported and managed in a very limited time period.

Beni Suef: All heavy equipment, such as gas turbines, generators, and transformers are delivered by vessel to Sokhna or Adabiya ports, and transported by truck from there to the site. The main challenge lies in the quantity of deliverables in such a short time. The transport equipment is well organised to cope with the situation.

How much financing has Siemens obtained so far for working on those stations?

The financing package for the Siemens’ part of the €6bn contracts was structured by Siemens Financial Services (SFS)—this includes a tailored guarantee concept. On 9 March, the loan agreements for the two combined cycle power plant (CCPP) projects in Burullus and the New Administrative Capital in Egypt have been signed. The financing of major parts of Orascom Construction and Siemens´ scope for the two power plants will be provided by a consortium of international and regional banks. The credit facilities are largely covered by export credit agencies. For Beni Suef, the financial target was already achieved on 30 December of last year.

What is the capacity of the Siemens power projects?

In June, Siemens had signed agreements worth €8bn for high-efficiency natural gas-fired power plants and wind power installations that will boost Egypt’s power generation capacity by more than 50%, compared to the currently installed base. The projects will add an additional 16.4 gigawatt (GW) to Egypt’s national grid to support the country’s rapid economic development and meet its growing population’s demand for power.

Siemens will also deliver up to 12 wind farms in the Gulf of Suez and west Nile areas, comprising around 600 wind turbines and an installed capacity of 2GW.

How do you evaluate Egypt’s investment and legislative climate?

I don’t see any major differences between Egypt’s investment climate and that of other countries. We executed our first turnkey project in Egypt in 1859, and we’ve been here ever since. In fact, we are a long-term partner who has known and understood the country for more than a century. We are an established part of the society and we are familiar with the regulations and market conditions that are applied in Egypt.

Are there any new proposals or suggestions for the Egyptian government to attract new investments?

We see a definite improvement in the investment climate in Egypt. From the point of view of a multinational company, the government’s clear vision and plan for the country’s long-term development of Egypt is a sign that the future holds further improvements. Egypt’s society is highly dynamic, with a population younger and larger than Germany’s. In addition, Egyptian citizens rightfully expect a bright and prosperous future for themselves and their families.

Egypt is now resolutely setting the course for sustained development and economic growth with the Sustainable Development Strategy: Egypt Vision 2030, serving as a roadmap for making Egypt a strong and stable economy on the long-term.

Are you negotiating the implementation of other projects with the Ministry of Electricity?

Siemens has extended a long-term contract to provide service and maintenance, as well as component upgrades at the Nubaria, Talkha, and El-Kureimat power stations.

The 10-year extension calls for Siemens to continue providing service and maintenance for eight SGT5-4000F gas turbines and the associated generators. In addition to long-term service and maintenance, the scope of the new agreement for the three power stations includes modernisations, upgrade measures, and lifetime extensions for eight gas turbines designed to achieve optimal performance.

We were also awarded a long-term service agreement for the three gas-fired combined cycle power plants in Beni Suef, Burullus, and the New Administrative Capital to ensure the mega power plants will operate reliably for many years to come.

What are the latest developments in the wind power projects and turbine blades factory with the New and Renewable Energy Authority?

The location of the blade factory has been selected (Ain Sokhna), the land purchased, and environmental permits have been issued.

We are currently in the process of selecting a company for the detailed design and construction of the plant, with approximately 1.5 years planned for construction.