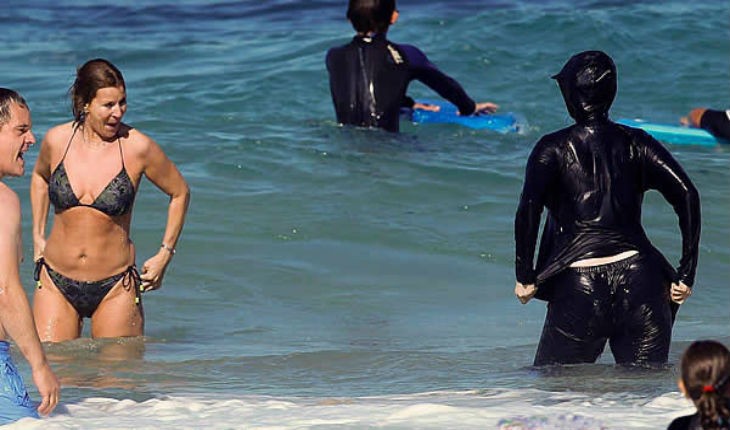 It’s 2016 and the world still insists on imposing unjustified patriarchal authority on women and blaming women for what they choose to wear. The world’s latest trend saw the “intervention” of what women should wear on beaches.

In an obvious violation to the principles of secularism in France, the mayor of Cannes decided in late July to ban women from wearing the burkini (full-body swimwear) on public beaches, saying that it is a sign of extremism in Islam. Several cities later followed in the footsteps of Cannes’ mayor and also banned the swimwear.

However, France’s high administrative court overturned the ban and said that the mayor has no right to ban women from wearing burkinis on beaches. Nevertheless, many mayors chose to ignore the court ruling.

Those in support of the ban would argue that the number of terrorist attacks in France has risen significantly over the past few months—most of which were claimed by Islamic State (IS). According to a BBC report, 64% of French people disapprove of the burkini.

In the UK on the other hand, one social experiment proved that tolerance is not a lost cause. A group of young adults dressed up as police officers and approached a woman who was relaxing on the beach, wearing a burkini. They tried to ban her from sitting on the beach, claiming that it was because of her burkini. However, 20 or so people gathered around them and argued that she should be free to wear whatever she wants.

Though the decision to ban the burkini contradicts with France’s secular principles, at least the majority of the French public who do reject the burkini claim that their reasoning is due to religious clothing being against secularism. However, in Egypt, a Middle Eastern country, where the majority of citizens are Muslim and the majority of women are veiled, several luxurious resorts have implemented their own ban and prevent women from entering pools wearing burkinis.

Society has constantly controlled what Egyptian women should and shouldn’t wear to various degrees, often encroaching on women’s comfort and freedom. Women are torn between what society wants, what society makes women think they want, and what they really want.

A young woman, who preferred to remain anonymous, told Daily News Egypt that she decided to wear the veil when she was 18; however, her family is considered aristocratic and they heavily criticised her decision. At first, they even prevented her from taking the step but she still wore the veil after what she calls “unjustified tension” with her family.

Veiled women are not only restricted from taking a dip in the pool, but also from entering some restaurants and bars. A group of women told Daily News Egypt some stories and incidents that happened because they choose to be veiled and the discrimination they have faced in a free, democratic country that is supposed to have no problem with the veil or the burkini.

Women relate their experiences with the burkini ban

Dina Kamel, 25, told Daily News Egypt that she was at a resort in Ain Sokhna. When she wore a burkini and went to the main pool, the pool attendant approached her and told her that she is not allowed into the pool. When she spoke to the manager, he told her that she agreed to these terms and conditions upon checking in to the resort, but Kamel said that she hadn’t checked all the terms. She also noted that there was another woman who wasn’t veiled but was wearing long clothes; she was prevented from entering the pool as well.

Daily News Egypt spoke to the public relations department in the aforementioned resort in Ain Sokhna to discover the reasons behind the ban. A representative, who preferred to remain anonymous, said that this ban is not pertaining to religious reasons, but rather is imposed on long clothes in general. He added that all the resort’s clients sign the terms and conditions when they check in, thus confirming their approval. However, he did not specify the reasons behind the resort’s rejection of long clothes in the swimming pools.

Menna Azmy, 23, told Daily News Egypt that she was banned from entering a pool in a burkini in the North Coast. She said that veiled women are not allowed in the pools.

Azmy added that in summer 2014, some pool attendants tried to force a woman who was swimming in the pool along with her family to get out, as she was wearing a burkini. When the latter refused, the manager of the resort had to force her to get out. Azmy said this is a common problem that happens nearly every summer.

“There were no terms or regulations that prevent any veiled woman from wearing a burkini in the pool when we signed the contract with the resort, but some owners say that they had these terms in their contracts so probably these rules were added later,” Azmy explained.

She concluded by saying that after several complaints, the resort designated a small pool away from the other pools for veiled women to access. The resort recently started adding facilities by this pool, such as bathrooms. This pool is a compromise on the part of the owners and managers following objections from women wearing long clothes who want to swim.

Daily News Egypt also spoke to the resort that prevented Azmy from using the pool. Resort representatives, however, denied preventing women with burkinis from entering the pool. This is despite several other women confirming to Daily News Egypt Azmy’s side of the story, as well as the ban that was imposed on them as well.

Nourhan Al-Tawansy, 22, was swimming in a resort in Dahab during the summer of 2015 in her burkini along with her friend. She said that the lifeguard whistled to her as a sign to get out of the pool, even though she had not signed any contract or terms stipulating that veiled women were not allowed in the pool. Moreover, there was no sign in the area, but the lifeguard insisted that she leave the pool in an assuming voice, insinuating that even though it was not a rule it was unacceptable that she be allowed in the pool.

Al-Tawansy said that her friend tried to convince her to get out of the pool without a fuss, but she insisted on staying. However, she didn’t file a complaint against the manager.

The official manager at the resort where Al-Tawansy stayed told Daily News Egypt that the one piece burkini is not banned at their resort, but rather clothes that are not considered swimwear are banned.

The problem is not restricted to the burkini, but to the veil in general

This rejection is not exclusive to resorts, but it is common in luxurious restaurants as well. Maryam Hamdy, 22, said that in 2014 she was trying to make a reservation at a restaurant in Zamalek for a birthday party. The waiter who was making the reservation was a bit hesitant when Hamdy told him about the birthday party. She at first thought that he was concerned about her age, however, the waiter told Hamdy that veiled women are not allowed in the restaurant, which also has a bar at night.

Hamdy said that unveiled women think they are the only ones who are oppressed in Egypt as it is a Muslim-majority country, but this oppression has laid its hands upon both veiled and unveiled women. Hamdy added that when she was in the UK, no one commented on her veil or the way she dressed.

Omneya Khalil told Daily News Egypt that when she was trying to make a reservation for her birthday at a cafe in Heliopolis in 2015, the staff told her that veiled women are not allowed to be invited. The cafe was not available for comment, but Khalil was able to send a copy of the message she received from the cafe—which read that veiled women are not allowed. Khalil added that the staff asked her for the personal Facebook profiles of those who were going to attend.

Women’s rights activist Alaa Al-Kassabany told Daily News Egypt that restricting where veiled women can go and what they can do is discrimination, because the veil has nothing to do with public appearance. She added that all girls and women should be free to wear whatever they want.

Al-Kassabany said: “I hope that men take themselves out of any equation that includes women because they have nothing to do with it. As for places that ban women from entering because there is alcohol present, it comes across as some kind of parental control over women. These places try to impose their control on mature women who are free to do whatever they want and who are completely responsible for what they do.”

The activist wondered, if places ban veiled women due to the sale of alcohol (from a moral perspective), then why are men not banned either?

Regarding the temporary burkini ban in France, Al-Kassabany said that the ban decision itself is against the core principles of secularism, because secularism states that everyone is free to do whatever they want—be it religious, cultural, or another activity. Oppression against anyone based on their chosen beliefs is against secularism as well.

Nevertheless, Al-Kassabany said that she has a bigger problem with Islamists who supported the French administrative court’s decision to not uphold the ban.

“They are two-faced—a lot of girls in Egypt are forced to wear the veil and they themselves sometimes insult girls who don’t wear it,” Al-Kassabany added.

Dalia Abdel Hameed, a researcher at the Egyptian Initiative for Personal Rights (EIPR), told Daily News Egypt that banning veiled women from entering certain places is an explicit act of discrimination, and an obvious intervention from both the state and the people as to what women “should” wear.

Discussions over the veil have been incredibly intense—some parties are trying to make the obligatory and other parties are trying to eliminate it. Abdel Hameed said: “Imposing the veil or disallowing it depends on a person’s socioeconomic background. If a woman comes from an underprivileged background, she may be forced or pressured into wearing the veil. Unlike those from wealthy backgrounds, for whom choosing to wear the veil is often not an option socially.”

The most mysterious part of all this, Abdel Hameed said, is that these bans and restrictions are happening in a country where the majority of women are veiled. Women are often considered as something to put a “label” on; subsequently families start to impose particular dress codes on their female relatives.

Regarding the attempts to ban the burkini in France, Abdel Hameed said that it was both terrifying and humiliating. She concluded that wearing the veil as a way to express one’s religion does not affect secularism whatsoever.

Regarding the perception of women’s rights in Egypt, a 2013 BBC poll claimed that Egypt is the worst country for women’s rights. Also casting a dark shadow, The World Economic Forum’s 2016 Global Gender Gap report said that Egypt is among the top 10 countries in terms of gender inequality.

In Cartoon: Egypt also bans burkini, but no one bats an eye