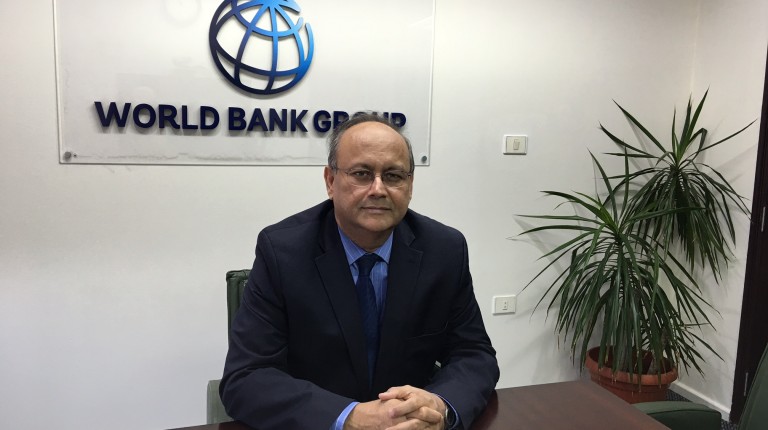 In an interview with Daily News Egypt, the World Bank’s country director for Egypt, Yemen, and Djibouti, Asad Alam, said that the Egyptian economy has the potential to achieve higher and sustained growth rates in the medium- and long-term.

The government of Egypt has announced its economic reform programme, which is part of the Sustainable Development Strategy: Egypt Vision 2030. What are the World Bank’s expectations regarding the growth and budget deficit in Egypt?

The Egyptian economy’s growth rate has recovered over the past two years—fiscal year (FY) 2015-2016—notwithstanding the shock from the decline in tourism. Growth has reached double the pace of the previous four years throughout FY 2010/2011 to 2013/2014, although it is still below its potential.  The Egyptian economy has the potential to achieve higher and sustained growth rates in the medium- and long-term, especially in light of the economic and structural reform programme that Egypt is adopting under the ambitious Sustainable Development Strategy: Egypt Vision 2030.  Sustained high growth rates are essential to prospects for job creation and poverty reduction.

Growth is expected to exceed 4% in the coming two years (FY 2017-2018), and to reach 5.5% by FY 2019.  More importantly, macroeconomic and structural reforms to reduce macroeconomic imbalances and reduce economic distortions will have a positive impact on growth.

Key structural reforms being pursued by the authorities include the strengthening of energy efficiency and security, promotion of domestic competitiveness including through reforms of industrial licensing, and simplification of the rules and regulations governing the business environment.

As for the budget deficit, Egypt is embarked upon a fiscal consolidation plan that includes key elements, such as gradually streamlining energy subsidies, containing government expenditures, and introducing revenue-enhancement measures.

Fiscal consolidation measures are expected to contribute to boosting confidence in the Egyptian economy, enhancing growth and efficiency, and boosting job creation.

These will also enable resources to scale-up allocations to the much-needed infrastructure and social protection spending, whilst also supporting priority spending on health and education. Better fiscal discipline is also expected to support measures to contain inflationary pressures.

Did the World Bank receive new requests from the government for loans to fund new projects? Will you elevate the portfolio after its increase last December according to the bank’s new strategy for Egypt? What are the new projects the bank is going to finance?

The envisaged lending programme is outlined in Egypt’s Country Partnership Framework (CPF). The CPF was endorsed less than a year ago in December 2015, and is still the relevant framework for World Bank Group operations in the country. The CPF already envisions a more than doubling of the World Bank Group’s financial support to Egypt to a total of about $8bn over FY 2015-2019.  Of this, an indicative amount of about $6bn is expected to come from the International Bank for Reconstruction and Development (IBRD), which finances public sector operations, and about $2bn from IFC, which finances private sector operations.

Under the new CPF, the bank is financing operations in various sectors. Operations that have been approved over the past two years include a $550m rural water and sanitation project to support improvements in water and sanitation in selected governorates in the Delta region benefiting large numbers of the population. It also includes a $500m inclusive housing project to enhance affordable housing for more than half a million low-income households and develop institutional arrangements for  the housing market, and a $500m household gas connection project to connect hundreds of thousands of poorer households. The World Bank is also financing a $400m social safety net project to support the rollout of the  government’s conditional cash transfer programmes expected to benefit millions of poor households and a $5m grant for equal access and simplified environment for business, which would help ease regulations for the development of small- and medium-sized enterprises (SME).

The bank has also recently negotiated a $500m programme for the Upper Egypt Local Development Project to support job creation and service delivery improvements in selected governorates. This project is currently being processed for approval by the bank’s board of directors.

The bank has also started preparing an agriculture competitiveness project to support the 1.5m feddan programme, with a strong focus on improving agriculture productivity, connecting small farmers to markets, and improving the efficiency of water use.

Other ongoing projects at advanced stages of implementation cover other sectors, such as energy, health, irrigation, transport, SME financing, and environment.

The World Bank has already started discussions with the government on the second Development Policy Finance operation. Like the first operation, this operation will also support the government’s economic reform programme, aimed at creating jobs, promoting investment, and reducing poverty. Key elements of the reforms being supported include measures to improve budget efficiency, strengthen energy security and efficiency, and promote competitiveness, especially for SMEs.