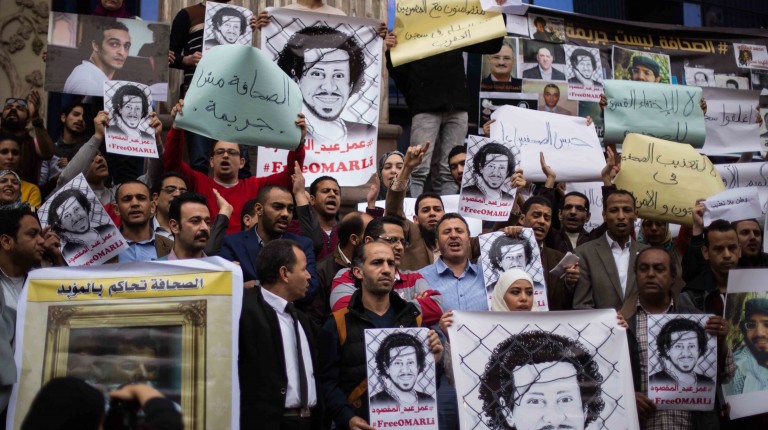 On Tuesday, social media users called for the start of an online campaign using hashtags for detained photojournalist Omar Abdul Maqsoud, who has completed over two years in detention, according to the Facebook page Freedom for Omar Li.

The decision to launch the campaign came three days before his retrial for ”burning a police car” in Mit Ghamr, Daqahleya governorate. He was sentenced to life in prison in this case on 19 January 2015, but the photojournalist appealed it.

In the same year, the journalist found himself also accused of ”unlicensed protesting” and sentenced to two years in prison; but in May, Mansoura Appeals Court dropped the charges against him in this case, according to independent newspaper Al-Bedaiah.

Abdul Maqsoud was arrested from his house along with his two brothers Ibrahim and Anas in April 2014. The three men were accused of setting fire to cars belonging to President Abdel Fattah Al-Sisi’s presidential campaign.

The photojournalist, who was working for Masr Al-Arabia news, is still accused in the case despite having submitted documents proving his innocence.

The journalist is suffering from poor health; his health status was discussed in several press conferences arranged by the Freedom Committee in the press syndicate.