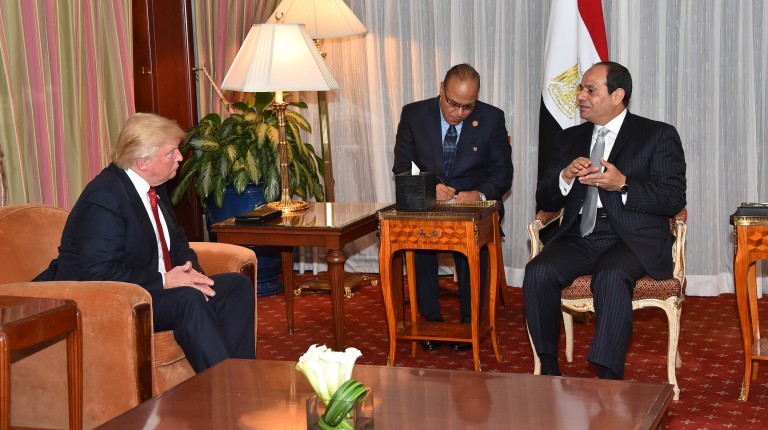 On Monday, President Abdel Fattah Al-Sisi met with the two United States presidential candidates, Donald Trump from the Republican party and Hillary Clinton from the Democratic party, on the sidelines of his participation in the 71st debate of the UN general assembly.

During his meeting with Trump, Al-Sisi discussed bilateral relations between Egypt and the US in political, military, and economic fields.

Trump recognised Egypt’s efforts in countering terrorism and extended the partnership between both countries for several decades, according to presidency spokesperson Alaa Youssef.

If elected, Trump vowed that he will be a “strong ally” that Egypt can rely on for the next few years, saying that Egypt and the US both face a common threat.

Trump has been notorious for his hostile stance towards the Islamic world, which casts doubt on his statements to Al-Sisi. The hallmark of his presidential plan to “make America great again” is to potentially ban Muslims from entering the US.

In 2015, he first proposed a plan to shut down entry for all Muslims to the US. After which, he gained wider support, escalating to become the only republican candidate competing with Clinton. Afterwards, Trump bluntly expanded his potential ban to all countries with a history of terrorism.

Throughout various rallies Trump supporters have also shown clear hostility towards opponents, often assaulting or kicking them out, even young children. “You can get the baby out of here,” Trump remarked in early August, referring to a crying baby at one of his rallies.

Meanwhile in his meeting with Clinton, Al-Sisi discussed historic and strategic relations between Egypt and the US and potential ways to collaborate in order to serve the interests of both nations, and maintain peace and security in the Middle East.

Hassan Nafaa, a political science professor, previously told Daily New Egypt ahead of Al-Sisi’s visit that the latter’s meeting with Trump was a must if he was going to meet his rival Clinton as well, in order to avoid any prejudice towards either candidate from Egypt’s side.