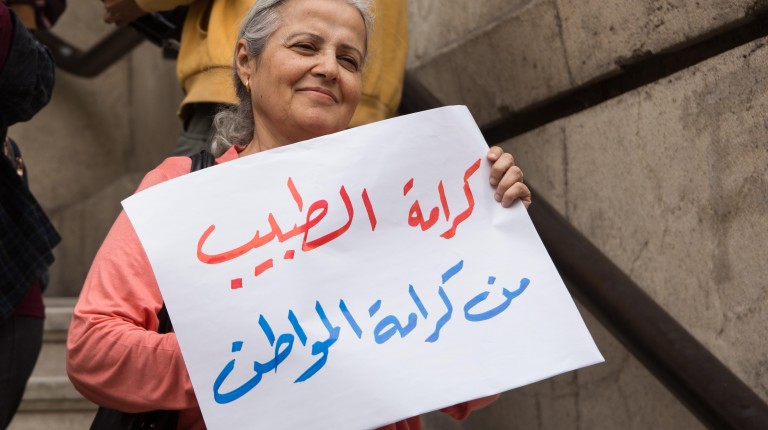 According to Mona Mina, secretary general of the Doctors Syndicate, the defendants were also fined EGP 5,000 each. She added that eight defendants were present in court during the verdict, while one was sentenced in absentia.

Speaking to Daily News Egypt on Wednesday, doctor Moamen Abdel Azim said he was somehow disappointed with the penalty, which is the maximum sentence in misdemeanours.

“That is why we wanted to make a criminal case,” said Abdel Azim, who was one of the two assaulted doctors at the Matariya Teaching hospital back in January.

According to the doctors’ account of the incident, a misunderstanding between them and an injured police officer turned violent after the officer’s colleagues gathered at the hospital and beat Abdel Azim and his colleague Ahmed El-Sayed.

“We were beaten, detained, and kidnapped,” said Abdel Azim, justifying why he believed the penalty should have been harsher. The doctors had also claimed at the time to have been pressured into not filing official reports. Moreover, they were interrogated over their opponents’ claims that they had physically harmed them.

The Doctors Syndicate held an emergency meeting in the days that followed the incident, calling for a general assembly that would support some outlined demands to hold the assaulters accountable, as well as holding the Health Ministry responsible.

On 12 February, thousands of doctors gathered at the syndicate in protest, chanting against police brutality. The syndicate took a further step by organising partial strikes at hospitals.

Coinciding with increasing reports on cases of police brutality against citizens, the doctors’ crisis stirred the support of political and civil groups into supporting the doctors’ revolt.

Following Monday’s verdict, Mina posted on her Facebook account: “Congratulations to all the doctors who attended the general assembly on 12 February.”

Since then, the two doctors have not returned to the hospital, as Abdel Azim told Daily News Egypt that they felt threatened by their adversaries, especially since the case moved to court.

“The court acquitted us from charges of assaulting the officers, but their sentencing does not mean it is over. They might appeal against the court’s verdict and there is no guarantee so far that they will not be on the loose,” Abdel Azim said Wednesday.

On the other hand, the defendants’ lawyer─who could not be contacted by Daily News Egypt─reportedly stated to the local press that the medical reports provided by the doctors were forged.

However, hospital staff had video evidence to support the assaulted doctors.