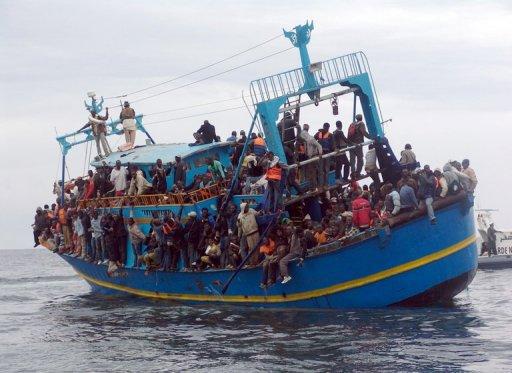 Border Guards Forces succeeded on Wednesday in rescuing 150 individuals after their boat sank while they attempted to illegally cross the Mediterranean Sea, according to Akhbar Al-Youm.

It was reported that nine dead bodies were recovered from the boat during the mission. The number is likely to rise.

The 150 rescued so far is only half of the number who were using the boat to cross the sea. Three-hundred people were allegedly on the boat, which sank off the Delta coast near Rashid.

The dead bodies lifted from the water were transferred to Rashid Public Hospital, according to Akhbar Al-Youm.

Thousands of illegal immigrants cross the Mediterranean Sea every year, and Egypt has become a popular destination to begin the journey. Egyptians are also counted among these immigrants, most of whom end up travelling to Italy. Hundreds of Egyptian nationals have been repatriated from Italy with the help of the Egyptian Foreign Ministry.

In Cartoon: Stuck between the sea and a hard place