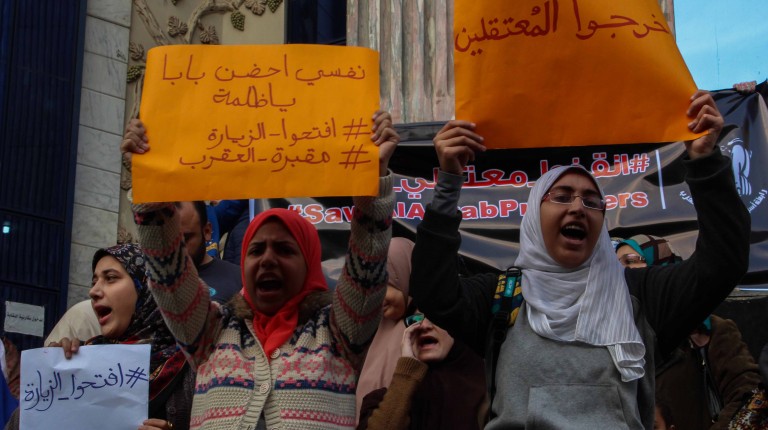 Human Rights Watch (HRW) released a new report Wednesday entitled “We are in tombs; abuses in Egypt’s Scorpion prison (Al-Aqrab),” which it said was based on 23 interviews conducted with relatives of inmates, lawyers, and a former prisoner.

The former prisoner is Al-Jazeera correspondent Abdullah Al-Shami, who was held in the Scorpion prison for one month, as part of his overall one-year detention which ended in June 2014. He recounted the abuse he received by personnel pressuring him into ending his hunger strike.

HRW further interviewed relatives of Muslim Brotherhood members detained in the prison, after mentioning that the group was considered the primary political opposition to the regime.

In a related video, HRW’s director of the Middle East/North Africa division Sarah Leah Whitson stated that the administration of President Abdel Fattah Al-Sisi “has made it very clear how it deals with opponents. It arrests them, tries them in trials that lack fair, standard procedures, and then detains and abuses them in Scorpion prison”.

Whitson said that the Egyptian government “arrested and detained by its own admission at least 34,000 people”, adding that “most senior Brotherhood members were held in Egypt’s maximum security prison: Scorpion”.

The report further sheds light on the death of six Islamist inmates at the prison: Farid Ismail, Essam Derbala, Nabil Al-Maghraby, Emad Hassan, Morgan Salem, and Mohamed Al-Said, all of whom reportedly died as a result of lack of medical care.

“HRW found that the authorities’ regular interference in medical treatment―including the arbitrary denial of medicine and the delay or refusal of outside medical care―also constituted cruel and inhuman treatment and, in the case of inmates who died in custody, might have violated their right to life,” the report said.

“One of the worst violations we found was the lack of medical care. The Interior Ministry has interfered with and deliberately denied medical care to detainees there,” Whitson added.

HRW further denounced other practices such as visitation bans, poor prison conditions, as well as physical and mental abuse. “The poor conditions in Scorpion led some detainees to begin a hunger strike in February 2016, and by the following month, at least 57 inmates had joined, according to one of their relatives. Government authorities responded by threatening some of those inmates with violence, and security forces in the prison assaulted others,” it said.

The report also quoted Major General Ibrahim Abd al-Ghaffar, a former Scorpion warden, saying during a television interview in 2012: “[It’s] a prison where there is no sunlight or fresh air. The amount of air is barely enough for people to breath. It was designed so that those who go in don’t come out again, unless dead. It was designed for political prisoners.”

The same quote was mentioned in a report released in August by the Arabic Network for Human Rights (ANHRI), detailing Egyptian prisons’ situation before and after the 25 January Revolution.

Although HRW’s report focused on Brotherhood members and other Islamist prisoners, given the nature of prisoners held at the Scorpion prison, the violations it mentions have also been reported against non-Islamist political opponents and activists.

International reports have been widely refuted by the Egyptian Ministry of Foreign Affairs, which usually slammed the credibility of organisations like HRW and Amnesty International, accusing them of political bias.

However, Foreign Affairs Ministry spokesperson Ahmed Abou Zaid said that the ministry would not comment about the new HRW report, while speaking to Daily News Egypt Wednesday. He did confirm receiving the organisation’s inquiries regarding the Scorpion prison and forwarding them to the specialised bodies, such as the Ministry of Interior.

The state-funded National Council for Human Rights (NCHR) has visited the Scorpion prison, sometimes minimising violations against prisoners. In other instances, it documented and acknowledged the widespread and long-standing problem of torture in Egyptian detention centres. Because of reporting violations, the council members have been denied visits to prisons lately.

Yet, the Ministry of Interior denied all claims. On one occasion, former spokesperson of the ministry Major Abou Bakr Abdul Kareem even denied the existence of the Scorpion prison, a section of the Tora prison.

In a 2015 interview with Daily News Egypt, wife of former Al-Jazeera journalist Baher Mohamed, Jihan Rashed said that when Mohamed was transferred to Scorpion prison, he had complained about the inhumane conditions he had encountered.

“Of the inhumane conditions he was being detained in, they decided to put him in solitary confinement without access to food or clothes. They had also stripped him of his clothes and given him a blanket. Too many insects. He said he did not know whether to use the blanket to cover himself up from the cold or put it on the floor to sleep on it,” she said.

In March, several local non-governmental organisations filed a lawsuit against the Interior Ministry demanding the closure of the prison, but there has been no development since, nor have state authorities proved goodwill in improving detention facilities. On the contrary, the state continues to pursue its crackdown on human rights advocates.

Prisoners remain in peril of poor conditions amid lack of accountability mechanisms: EIPR