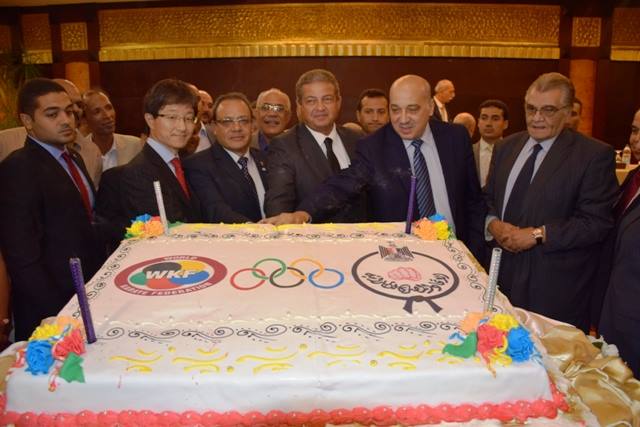 The Egyptian Karate Federation, presided over by Ayman Abdel Hamid, celebrated on 26 September the announcement that karate will be included in the 2020 Tokyo Summer Olympics.

Regarding Egypt’s participation in the 2020 Tokyo Summer Olympics, Abdel Hamid told Daily News Egypt: “I promise that Egypt’s karate champions will win three Olympic medals, and at least one of those will be gold.”

Several sports figures were present, including Minister of Sports and Youth Affairs Khaled Abdel Aziz, former president of the Egyptian Olympic Committee Mahmoud Ahmed Aly, and Keen Makawo, who attended on behalf of the Japanese ambassador to Egypt, Takehiro Kagawa.

Makawo expressed that Japan will work diligently to cooperate with Egypt in all fields related to sports.

During the celebration, Mohamed El-Housiny, a member of the Egyptian Karate Federation’s board of directors, stated that the number of players registered at the federation is currently 53,997. El-Housiny also said that 11 national championships are held annually, while the number of national leagues is 14. He added that Egypt was previously ranked 14th internationally in the sport, but this year the country jumped to 6th place.

To honour the success of Egypt’s karate champions, the sports minister allocated EGP 500,000 for martial arts in 25 governorates.

In 2017, Egypt is scheduled to host two important events. First is the Karate World League, to be celebrated in the Red Sea resort city Sharm El-Sheikh in February. The second event that Egypt will host is the Karate World Championship, which will take place at the Cairo International Stadium in November 2017.

The 2016 Karate World Championship will be held in the Austrian city of Linz, at the Tips Arena, from 25-30 October. Over 2,000 karatekas [karate practitioners] and coaches will participate from 135 nations.