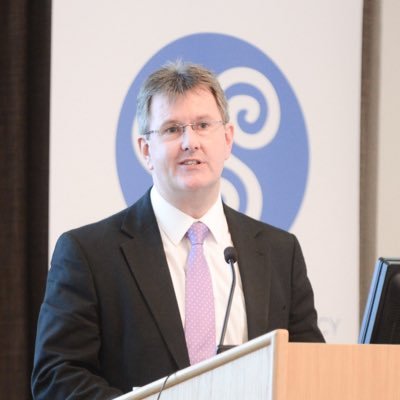 Daily News Egypt sat down with UK trade envoy to Egypt Sir Jeffrey Donaldson and director of UK Trade and Investment at the British Embassy in Cairo Jason Ivory to talk about potential British investments in Egypt, and specifically in the Suez Canal Economic Zone (SCZone).

What are the possible British investment opportunities in the SCZone?

At the moment, we are talking to a number of British companies in Egypt who are interested in investing in the SCZone to create employment opportunities in the construction and engineering industry.

In terms of the current phase of developing the SCZone, the main interest comes from construction and engineering companies, as well as service providers. I expect more interest for a wide range of sectors inside the SCZone.

Can we expect that a British delegation is going to visit Egypt in the coming period?

A very strong Egyptian delegation is going to visit the UK in November. The trip is organised by the British Egyptian Business Association (BEBA). I hope it results in more business opportunities. After that, we will bring more UK trade missions to Egypt later this year or next year.

What do you think of the corporate income tax of 22.5%, imposed by the General Authority for the Suez Canal Economic Zone?

Of course the SCZone has to find a way to finance the infrastructure that needs to be prepared. We understand that. I still think that the SCZone is very attractive for British companies to invest in.

What challenges are British investments in the SCZone facing?

We support the reform agenda in Egypt, as we believe that Egypt is attractive for investments. However, it needs to reform its bureaucratic system to make it easier for British companies to invest and create employment opportunities in Egypt.

What privileges does the SCZone provide for investors?

Ahmed Darwish, chairperson of the General Authority for the Suez Canal Economic Zone, is a dynamic leader. He recognises that making the zone attractive for investors is a top priority. Darwish announced during a conference that the SCZone will provide training support for companies investing in the zone. I think such incentives will help attract more investment.

How will Britain’s exit from the European Union (EU) affect the bilateral agreements between Egypt and the UK?

In my personal opinion, I think the new agreements will be better than the current agreements. I think they will be more beneficial for both countries.

How will Brexit affect investments inside and outside of the UK?

The vision will become clear and I think Brexit will provide more opportunities to British companies to do more business outside the EU. Thus, we are looking for new and developing markets and Egypt has been identified as a priority for the UK. Therefore, I believe that the UK is the ideal partner for the SCZone because we can offer investments, expertise, education, and skills, and we can help create employment opportunities for young Egyptians.

Will the instability of the Egyptian pound’s value and the appreciation of the US dollar affect potential British investments in Egypt?

We are certainly waiting to see the Egyptian government’s initiatives regarding this issue, which we welcome. I think it will help stabilise the Egyptian currency and the economy, making it more attractive for investment.

The UK has been a consecutively good investor in Egypt throughout all of its economic ups and downs. It stood by Egypt and we will continue to do so. We don’t only come to Egypt when the situation is good, because we believe in the opportunities in this country.

Will the trade balance between the two countries be boosted in the coming period?

I think trade between the two countries will increase, as Egypt is a rapidly growing population, so I want to see more British companies doing business in the Egyptian market. In addition, I want to see more Egyptian companies exporting goods to the UK. Thus, I want to see a better trade balance between the two countries and that is why we recognise the importance of helping Egypt’s economic development, in order for it to be stable and prosperous. The entire Middle East needs a stable Egypt, and that is why we are prioritising Egypt.

The EU, US, and other countries have concerns regarding the registration of foreign factories in the General Organization for Export and Import Control (GOEIC). Do British companies have similar concerns? If so, do you think that this will hurt trade between the two countries?

There are always some issues that need to be resolved. We support a reform agenda and we want to see the Egyptian government taking it forward, in order to make it easier for British companies to invest in Egypt.

Every country in the world has restrictions on trade. The EU and the US do that, so why shouldn’t Egypt have the right to do the same.

We are seeking to work with Egypt to ensure that we have fair trade so that it is easier to do business in Egypt.

Did you receive any complaints from British companies operating in the Egyptian market?

Should we expect the return of British tourism soon after the suspension?

The decision will be made by the British prime minister, who also recently met with President Abdel Fattah Al-Sisi in New York. The UK is continuing to work closely with the Egyptian government to ensure that all the measures required are put in place, but these things take time.

Britain is interested in the vocational training sector in Egypt. How does this help boost investments in Egypt?

We are working closely with a number of universities, colleges, and training providers in England to encourage partnerships between establishments and training providers, with an aim to share expertise and experience with Egyptian companies and universities. We can help in building the capacity of the education system in Egypt to bring about the work force that Egypt needs to prosper in the future. It is a great opportunity for the SCZone when foreign companies are willing to invest in developing the skills of labourers they need to manufacture goods.

How many British companies operate in the Egyptian market?

I think there are approximately 700 companies, and we have more companies in the Egyptian market than anybody else. We also continue to invest in Egypt.

How much British investment can be found in Egypt?

What is the size of trade between the two countries?

The UK’s value of exports to Egypt reached $1bn in 2015, while Egypt’s exports to the UK amounted to $600m in the same year.

Did you receive any complaints about Egyptian imports?

No, as I mentioned we receive imports worth $600m, so we are a very good trading partner.

What other goods and products is the UK seeking to import from Egypt?

Did the embassy receive complaints from British companies or factories exporting to Egypt, regarding the required registration at the GOEIC?

To be honest, the need to register causes some problems for companies exporting to Egypt in general, not just those in the UK. The feedback we received from British companies mainly revolves around how the bureaucracy is causing problems, and we try to work with them and the Ministry of Industry and Trade to resolve these issues.

We receive complaints on a regular basis, but I don’t have specific figures. Consequently, we keep the dialogue going and try to make it as easy as possible for any company wanting to export to Egypt.

Did you talk to the Ministry of Industry and Trade regarding registration at the GOEIC?

The Egyptian government made the decision and legislation, and we have to respect it. We are trying to work with Egypt’s ministries to make the system easily accessible and reduce the level of bureaucracy.

What other issues does British investment face in Egypt, besides bureaucracy?

Bureaucracy is the biggest issue, besides foreign currency. We know that the Egyptian government is trying to address that. This does not only affect British companies, but all international companies.

What are the most promising sectors to invest in?

There are some problems in Egypt’s renewable feed-in tariff (FIT) framework. Does this concern the British companies who are willing to invest in the country?

Yes, we have a number of issues regarding the FIT, but this has to come to an end. What we are trying to do is encourage British companies to reconsider what they want to do for the second round of FIT.

Are you negotiating the FIT system with the government in order to make amendments or facilitations?

We don’t seek negotiations with the government regarding the FIT system. Companies decide whether they are interested to invest or not, according to these terms.

Bureaucracy is killing this country: CEO of WVB