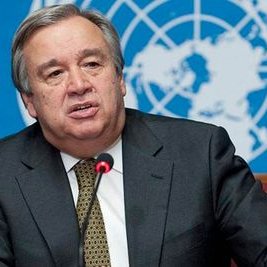 Egypt’s permanent ambassador to the UN Amr Aboulatta said that Egypt welcomes the election of Antonio Guterres as the new UN secretary general.

Guterres will succeed Ban Ki-moon who will end his term in December. The UN Security Council member states, both permanent and non-permanent, unanimously selected Guterres on Wednesday.

Aboulatta said on Thursday that Egypt believes Guterres was “indeed an outstanding candidate,” and is looking forward to cooperating with him in UN-related issues.

Egypt is currently a non-permanent member in the UN Security Council.

However, Aboulatta said that Egypt believes there should be a separate voting process during the general assembly among all UN member states, instead of only limiting the votes to UN Security Council members, in order to bolster the UN democratic concept of decision-making.

Originally from Portugal, Guterres worked as the head of the UN High Commissioner for Refugees (UNHCR) from 2005 to 2015, during the turbulent refugee crises including Syria and Iraq.