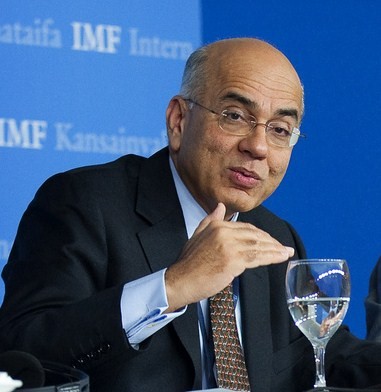 Masood Ahmed, director of the Middle East and Central Asia department at the International Monetary Fund (IMF) announced at a press conference on Friday that Egypt’s funding package will be presented to the fund’s executive board by the end of October or early November.

During the press conference, Ahmed said that the IMF is working to secure the necessary funding to close the gap of the first year and obtain the approval of the fund’s executive board. He added that the funding gap ranges between $5-6bn, noting that talks with Saudi Arabia and China are ongoing in this regard.

He pointed out that the funding scheme will be presented by the end of October or early November. “The first tranche of $2.5bn will be made available after the IMF’s executive board reviews the programme,” he said, adding that the programme will be revised periodically every six months.

Moreover, he explained that Egypt is facing several problems, particularly unemployment, the exchange rate, and the rising volume of dues. However, he added that steps taken by the government, especially moving towards liberalising the exchange rate, creating jobs for women, and protecting children from labour, are welcomed. He praised the programme, pointing out that it was penned by the Egyptians themselves.

He also highlighted a few major economic and demographic challenges facing the region, with a focus on the refugee crisis and the oil market.

During the press conference, Ahmed expected oil-exporting economies to remain unchanged in terms of oil price, which he estimated to stabilise at $50 per barrel.

Ahmed lowered his expectations for the accumulating budget deficit of oil-exporting countries from $1tr to $765bn over five years.

He said that those countries face major challenges given their reliance on oil to stimulate their economies, pointing to the long-term economic vision of Saudi Arabia.

Moreover, he noted that these countries will be facing even more burdens given the rising number of citizens seeking jobs, as roughly 2 million people will reach the labour market within a year—half of whom may not be able to land a career.

On the other hand, he said that under those conditions, oil-exporting countries have been able to adopt new policies to sustain their economic development. “The major obstacle is not in the plans themselves, but rather in implementing those plans,” he stressed.

He advised the region’s leaders to enhance their business environment and support the public sector, naming infrastructure and electricity in particular, along with the conditions for obtaining loans.

As for Tunisia, Ahmed said it also is facing a hard period. He highlighted the development plan sought by Tunisia, which aims to create jobs and at the same time adjust spending. He praised the steps taken by the Tunisian government in this regard, particularly in terms of enhancing spending policies to stimulate investments and caring for low and limited-income citizens.

As for Yemen, he welcomed the Yemeni government’s decision to move the central bank of Yemen to Aden. He said that there have been talks with the Yemeni authorities, noting that an IMF mission is currently providing consultation to officials of the central bank to ensure it operates smoothly.

Furthermore, Ahmed stressed that Jordan is working to increase growth and enhance economic competitiveness, praising the steps taken in that regard across all ministries in Jordan.