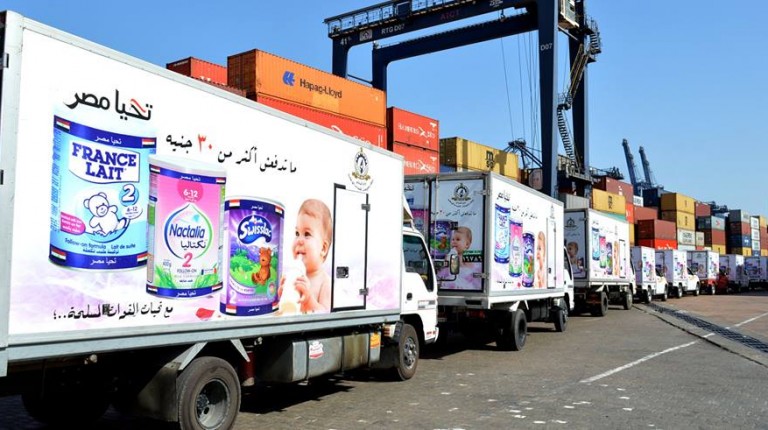 The second shipment of baby formula arrived in Dekheila port, Alexandria on Sunday. It will be sold at Health Ministry-affiliated retail outlets across Egypt at EGP 30 per carton, according to the spokesperson for the Egyptian Armed Forces Mohamed Samir.

Despite its availability following the shortage, some families cannot afford to buy formula at the higher armed forces supply price, and choose the Health Ministry baby formula as it is more affordable.

“After undergoing a breast examination, the Health Ministry office in Al-Warraq district sold me eight cartons—but these are all finished now. I’m waiting to buy more for my daughter next month,” Mona Hassan, a mother of two children living in Embaba, told Daily News Egypt on Monday.

She said that the ministry limits the supply to just eight cartons due to the risk of shortages that would impact other families.

Hassan explained that she buys baby formula from the ministry at EGP 5 per carton as she cannot afford the pharmacy price at EGP 30. She added, however, that she has resorted to buying from the pharmacies because she cannot obtain more formula until 19 October. “This puts pressure on my family’s monthly budget,” she said.

The ministry-supplied formula is subsidised and exported from Syrian companies, therefore it is cheaper than the armed forces supply which are from French companies, she said.

Her remarks on the availability of formula imply that mothers may tend to buy a different type or standard of baby formula every couple of months.

“Two years ago, for my first baby, I bought the ‘second-level’ baby formula for EGP 18 a carton. Now it has increased to EGP 26, so I have to buy eight bottles for more than EGP 200,” Hassan said.

Prior to 19 September, she went to several ministry offices in her area but was unable to find baby formula. During the shortage, she had to take money from her parents to buy it from the pharmacies. “Some of my neighbours were not so lucky as to ask for money from their parents,” she said.

The shipment received on Sunday was part of the Egyptian Armed Forces national service projects department’s contract with a French baby formula company to supply it for local markets. The first shipment of baby formula arrived in September.

The armed forces’ assistance came in response to the recent shortage in baby formula across all retail outlets as the Egyptian Pharmaceutical Trading Company, which is responsible for subsidising pharmaceutical products to citizens across all governorates, was unable to make the formula available. This shortage led the impacted families to assemble at the company’s headquarters and block the main road, after failing to find the formula in any retail outlets.

Following the protest, a spokesperson announced that the armed forces will carry out an initiative to provide affordable subsidised baby formula in “an attempt to counter the greed of traders and companies”.