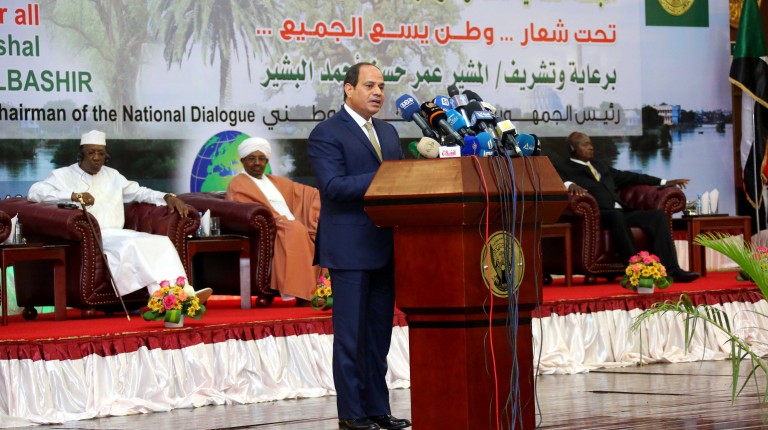 President Abdel Fattah Al-Sisi expressed his happiness regarding the discussion and positive results of the Sudanese National Dialogue, during the closing session of the conference held in Khartoum, the capital of Sudan, on Monday.

Al-Sisi began his speech by greeting all attendees, and explaining his understanding of the dialogue’s significance for Sudan, confirming that the Egyptian people wish the Sudanese people success and stability.

The president called for cohesion among the Sudanese people, and urged them to unify in order to form a national unity government.

The president arrived in Sudan on Monday to attend the closing session of the dialogue conference, in response to an invitation from Sudanese president Omar Al-Bashir. Egypt also participated in the national conference, in accordance to a strategic partnership signed during the joint Supreme Egyptian-Sudanese Committee sessions that took place last week.

Al-Sisi expressed his happiness regarding the results of the joint committee sessions, and stressed on Egypt’s efforts to intensify its cooperation with Sudan to achieve the countries’ common interests, and Egypt’s support for peace in Sudan.

In his speech, the president praised Al-Bashir’s performance for working on maintaining peace and stability in his country, describing him as ”courageous statesman”, and also praised the initiative to maintain peace by offering a floor for dialogue among all forces and political groups.

He also welcomed the Sudanese initiative to sign a roadmap presented by the African Mediation Mechanism in March, and also the country’s keenness to respond to regional and international efforts aimed at achieving security, stability, and peace in all parts of Sudan.

The closing session was attended by members of political parties, Sudanese members of parliament, and officials who presented their views regarding the national conference’s aims.

On the sidelines of the conference, Al-Sisi and Al-Bashir met for bilateral talks upon his arrival to Khartoum. During the meeting, the leaders confirmed their countries’ cooperation and partnership, followed up on the joint committee sessions, and reviewed the results of the conference sessions.

The document was signed after two years of negotiations, as the conference was supposed to take place last January.

The Sudanese president said that the national document reflects the will of the Sudanese people and serves as a foundation to govern the country. He stated that it also includes the views and aspirations of all political forces, including the opposition, adding that the “door will remain open for anyone who wishes to join it,” Sudanese local media reported.

In January 2014, the Sudanese president called on political groups to participate in a national dialogue, in order to discuss four issues that include ending the civil war, allowing political freedoms, fighting against poverty, and revitalising national identity.