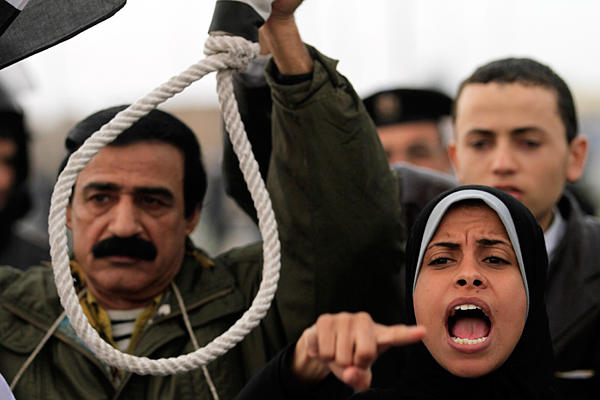 Groups of activists worldwide launched several campaigns in line with the World Day against Death Penalties. “Execution of a Nation” is a campaign released by the Egyptian Coordination of Rights and Freedoms which documented the death sentence verdicts in Egypt following the 30 June uprising.

According to the Office of United Nations High Commissioner for Human Rights (OHCHR), a group of UN human rights experts spoke prior to the commemorative day to remind governments around the world that death penalties are ineffective deterrents in combating terrorism, and sometimes could be unlawful.

The human rights experts also said that the imposition of executions happen mostly in the Middle East and North Africa, within which the governments resort to death penalties as a strategy in their counter-terrorism campaigns.

The OHCHR and other international rights organisations had previously criticised the mass death sentences in Egypt. The Ministry of Interior announced that a total of 14 death sentences have been carried out so far this year. According to the “Execution of a Nation” campaign, about 1,840 cases were referred to the Grand Mufti, following the ouster of former president Mohamed Morsi on 3 July 2013. The referral of the documents is a measure taken before carrying out the death penalty, but the Grand Mufti’s opinion is not obligatory.

Amnesty International said that the rate of death penalties increased by about 45% in 2015 in comparison to 2014. The Justice for Human Rights institution demanded the suspension of all verdicts released by civil and military courts, particularly in cases pertaining to terrorism amid the political turmoil in Egypt. They also called on the necessity of adhering to international human rights principles, and not referring civilians to military courts. They concluded by demanding the implementation of the Constitution and stopping torture in Egyptian prisons.

The coalition for relatives of people who received death penalties released a statement as well, stating that Egyptians do not trust the judicial system as a result of unfair trials. Thus, they demanded fair retrials and the suspension of current death verdicts. The coalition also called for investigations into what they called “systematic enforced disappearances” that happen to those who receive death sentences. The coalition demanded enabling rights organisations to meet the victims to document violations they have been subjected to.

The official numbers of death sentences have been unclear since 2013 due to the lack of information, whereas in about two third of countries, the death penalty is prohibited. UN secretary general Ban Ki-moon released a letter on Monday that read that death penalties given in terrorism cases are usually a result of unfair and swift trials. He added that opposing the government and peaceful demonstrations are not terrorism.

Egypt is among 65 countries that still enforces the death penalty. Although the official number of death sentences that have been given in Egypt since 2013 are unclear, but the rate of mass verdicts for the death penalty have notably increased since then.