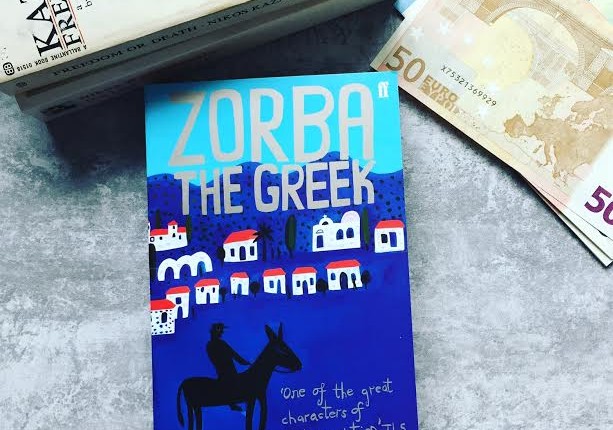 It all started when writer Nikos Kazantzakis went on a business trip to Crete, to escape his bookish life.

During his travels, he meets the story’s protagonist, Alexis Zorba, who fascinated him, and became Kazantzakis’ companion in Crete. Zorba’s character is the contrary to Kazantzakis, just as in Miguel de Cervantes’ novel Don Quijote de la Mancha, Sancho was contrary to Don Quijote.

In the novel, the writer learned about life through books, while Zorba built his vision of life by simply living it─travelling, making friends all over the world, having adventurous relationships with women from different countries, and all the while playing the santuri (a stringed instrument).

The writer becomes liberated and learns to be passionate about life, thanks to the times and experiences he shares with Zorba.

The novel transmits to the reader the gateway to leading a happy life through simple blessings, thanks to Zorba’s view of life. His philosophy balances between happiness and success. Throughout several occasions, Zorba shows the qualities of a successful businessman, wherever he settles. Being exposed to many cultures, in addition to his human side, he knows how to get through to people for the sake of business. His love of life makes him passionate, no matter what he worked in or at; thus, making him successful.

Throughout the story, the reader travels the world and learns about its different cultures, starting from the Greek port of Piraeus where Kazantzakis commences his journey, passing through the Caucasus, from where a friend of the writer sends him letters, settling in Crete where the writer mostly interacts with Zorba, and ending up in Serbia, where Zorba finds a copper-mine in a mountain, marries a slave called Lyuba, and afterwards dies.

Speaking to the writer about his relationships with Russians Sophinka and Noussa, Zorba does not only convey the physical aspects of Slavic women, but also their character and how they treat men: “Oh, those have a certain charm, he sighed. O wonderful Slav, may you live a thousand years! What freedom! None [of] those where have you been? Why are you late? Where did you sleep? She asks you no questions and you ask her none. Freedom.”

In the book, Zorba also talks about religion. The reader gets to delve into how religion was involved in the lives of Greeks, but also─through Zorba’s humourous criticism─how it was used for individual benefits, especially in Crete.

Contrary to that, Zorba’s view of the use of religion in Russia is different, as can be seen when he speaks to Noussa’s father: “We all threw ourselves on the food with a will, the women as well as the men. We guzzled and swilled, we ate like pigs and drunk like fish. What about the priest? I asked Noussa’s father, who was sitting beside me and whose body was steaming through eating so much. Where is the priest to bless us? There is no priest, he spluttered, there is no priest. Religion is opium for masses.”

Through Zorba’s vivid elaborations on the differences between Russian and Greek women, the reader’s image of Mediterranean and Slavic women is crystallised. Zorba explains: “You are passing by, you see a watermelon, you take it. Not like here in Greece, where if you ever pinch the tiniest bit of skin off melon you are hauled up before the courts, and as soon as you touch a woman her brother rushes up and draws his knife to make sausage-meat of you”. He continues: “Let me tell you boss, the Slav woman is not like those skinny, greedy little Greeks who sell you love a drop at a time, and do everything they can to palm you off with less than you’re due and swindle you over the weight. No boss, the Slav gives you good measure. In sleep, in love, and in food. She is so nearly related to the beasts of the fields and the earth itself. She gives and gives bountifully; she is not niggardly about it like those haggling Greeks.”

Literature has a way of revealing the human side of the most tragic historical facts. An example for that is the Spanish poem of El Cantar del Mio Cid, in which Rodrigo Diaz De Vivar, famous for his battles against Arabs and Muslims, is protected by his Arab-Muslim friend Abdel Rahman. Some of the poem’s verses explicitly paint the human side of the conflict.

This human side can also be found in Zorba. Despite the tense relations between the Turks and Greeks, the book includes human situations that highlight the niches where conflicts cannot invade humanity. For instance, this can be found when Zorba tells Kazantzakis on the ship sailing to Crete: “I vanished to it [santuri] to Salonica and got hold of a Turk, Retsep Effendi, who taught everybody the santuri. I threw myself at his feet. What do you want, little infidel? He said. I want to learn the santuri. All right, but why throw yourself at my feet? Because I have no money to pay you! And you are really crazy about the santuri, are you? Yes. Well, you can stay my boy. I do not need paying. I stayed a year and studied with him. May God sanctify his remains! Since I learnt to play the santuri, I have been a different man.”

The novel touches upon the tensions between the Greeks and Turks and between the Greeks and Macedonians. However, the three countries were extremely connected and culturally enriched one another, which is evident in Zorba’s flashbacks: “I am going to let you into a secret, boss, something a hodja (Turkish holy man) once told me in Salonica… At the time I was a pedlar in Macedonia. I went into villages to sell reels of thread, needles, the lives of the saints, benjamin, and pepper. I was also peddling in Salonica and even went to the Turkish districts. And, it appears, my voice had so charmed a rich Muslim woman, the daughter of a pasha, that she could not sleep. She called an old hodja and filled his hands with mejidies. Aman (Mercy) she said to him. I cannot hold out any longer! The hodja came to find me. Listen, young Roumi, he said to me.”

Food is a very important aspect for Mediterranean residents. In countless situations, the writer indirectly introduces us to traditional Greek food, and how important wine is for a delicious meal and enjoyable conversation in the Greek traditions. After a hard day or an unpleasant situation, Zorba and the writer change their moods with tasteful food, wine, and pleasant company. Food and drinks are also part of the more enjoyable moments, such as festivals and ceremonies.

Last but not least, the novel is a picturesque description of nature, people, situations, human interactions, and daily life aspects, through which the reader will happily get lost in Greece, its islands, and other parts of the world.

Wihout a doubt, Zorba the Greek, along with The Odyssey, and The Iliad, are among the pillars of the Greek literature.

Even prominent novelist Lawrence Durrell was captured by Zorba’s magic, saying: “A marvellous evocation of a landscape, and a sketch of a temperament as validly Greek as Odysseus himself. It is a captivating book.”