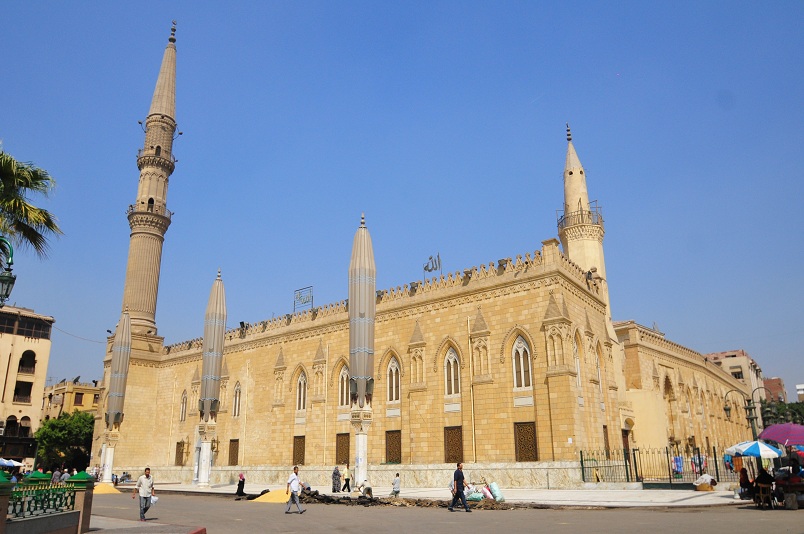 As followers of the Shi’a sect of Islam around the world mark the religious festival of Ashura, the Ministry of Religious Endowments Ministry, in co-ordination with the Interior Ministry, decided to temporarily close the popular Shi’a destination in Egypt, Al-Hussein Mosque, on Tuesday evening after prayer to avoid large gatherings.

Al-Hussein Mosque was built in 1154; the mosque is located in Cairo, near the Khan El-Khalili bazaar. It is considered to be one of the holiest Islamic sites in Egypt.

It was named after Al-Hussein, grandson of the Prophet Muhammad, and the mosque is the alleged burial place of Al-Hussein’s head. The location is visited regularly by many Shi’a Muslims.

According to state-run newspaper Akhbar Al-Youm, the security apparatuses in Cairo banned commemorations of Ashura inside Al-Hussein Mosque by evacuating the mosque’s arena of worshipers and closing the mosque after each prayer.

Police officers and security personnel were deployed around the mosque as hordes of Shi’a worshipers gathered in front of Al-Hussein’s grave situated inside the mosque and chanted verses affiliated to the Shi’a sect during prayer time, Akhbar Al-Youm reported.

“The Shi’a denomination declared that it would not officially commemorate Al-Hussein’s death in Egypt, and we fully understand the government’s decision to close Al-Hussein’s grave and the mosque. They aim to protect us as Shi’a to avoid others from exploiting the Ashura day to commit sectarian incidents,” leading Egyptian Shi’a figure Taher Al-Shamy told Daily News Egypt on Wednesday.

In response to threats addressed from some Salafi currents to curb any Shi’a rituals in Egypt, he asserted that threats are considered legally unacceptable according to the Egyptian Constitution. Thus, the Shi’a denomination will follow up with legal action against these threats.

Regarding the Shi’a population in Egypt, he noted that it is difficult to obtain accurate numbers of the denomination in Egypt, as many do not clarify their sect when registering with the state.

In 2015, the Giza Criminal Court sentenced 23 defendants to 14 years in prison on charges of killing Egyptian Shi’a cleric Hassan Shehata.

The incident goes back to 23 June 2013, when Shehata, two of his siblings, and a student were killed, while dozens of others were injured, as a result of sectarian violence in the town of Abu Mussalam, located in Giza.

The murders took place when approximately 24 Shi’a gathered at a local residence to celebrate the birth of Imam Mohammed ibn Hassan Al-Mahdi, believed to be the 12th and last imam in Shi’a Islam. The gathering was attacked by a mob armed with molotov cocktails and other weapons.

The Egyptian Initiative for Personal Rights (EIPR) had previously stated that the incident was due to years of incitement against the religious minority sect. The group said this was conducted by the leaders of Al-Azhar, state agencies, and different Islamic movements, which repeatedly considered the presence of Shi’a Muslims in the country as a threat.

In April 2013, during Morsi’s reign, Egypt’s ministries of foreign affairs and civil aviation set regulations restricting the activities of Iranian tourists in Egypt, limiting them to sites such as the ancient city of Luxor and Red Sea resort areas like Sharm El-Sheikh.

During the same period, the Salafi Call, the religious arm of the Al-Nour Party, warned of a “Shi’a tide” in Egypt, and called for a ban on any contact with Shi’a Muslims. The incident happened when dozens gathered by the acting Iranian ambassador’s house demanding the cutting of all ties with Iran and the expulsion of Iranian tourists.

Even after the ouster of Morsi, Minister of Religious Endowments Mohamed Mokhtar Gomaa rejected any celebrations by Shi’a for Ashura inside mosques, calling on authorities to implement the decision.

While numbers are unclear, it is estimated that Shi’a account for 10–15% of the Muslim population, around 200 million, worldwide.

Historians note that the Shi’a sect dwindled in Egypt in the mid-12th century with the crumbling of the Fatimid era.