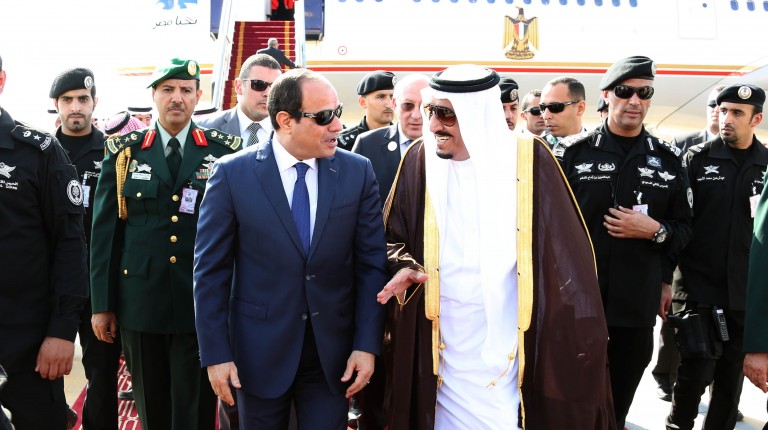 Following Egypt’s vote on the Russian-backed draft resolution in the United Nations security council, Saudi Arabia and Egypt have started a cold war on media platforms. Egyptian officials, however, are denying any political disagreement between the two countries.

The fences around the Saudi embassy in Egypt have been reportedly removed for hindering the flow of traffic.

Following the vote in the security council, the Saudi envoy to the UN said that Egypt’s was “painful”. Washington-based Saudi lobbyist Salman Al-Ansari also condemned Egypt’s decision by posting to Twitter, saying, “Egypt’s voting makes me rather suspicious of its motherhood to the Arabs and the world”.

Days following the voting, Saudi Aramco halted its oil supplies to Egypt. The Egyptian Ministry of Petroleum said that this halt would be temporary and restricted to October, and the 5-year agreement with the Saudi company was still in effect. Citing Egyptian Ministry of Petroleum spokesperson Hamdy Abdel Aziz, Aramco’s Accelerated Transformation Program (ATP) said that the halting decision was made due to a commercial issue, not a political one. In addition, he  was informed that this decision was taken before Egypt’s voting at the UN.

Political Analyst Gamal Sultan told Daily News Egypt that Egypt’s voting definitely resulted in tension between the two countries. He also surmises that Aramco’s decision was a result of the voting.

“The Saudi press severely criticised Egypt’s voting decision, and I don’t think there will be further escalations. However, for Egypt’s interest, I hope there will be no more escalations taken from the Saudi side.”

Egyptian journalist Ibrahim Eissa said that Saudi Arabia cannot bear the leading and independent stance that Egypt has taken. Saudi Arabia wants Egypt to follow in the decisions of Riyadh. Journalist Abdullah Al-Sennawy in an interview denied any strategic coalition between Egypt and Saudi Arabia, saying that if the two countries really do operate as a strategic coalition, they would at least agree upon their approaches to the regional turmoil.

Egyptian media figures also voiced their opinions on Egyptian-Saudi bilateral relations. Pro-regime TV presenter Ahmed Moussa spoke in a rather defensive tone and said that Egypt does not need anyone, and its decisions are sovereign and independent. However, TV presenter Lamis El-Hadidy said relations between Egypt and Saudi Arabia are strong and cannot be voiced publicly. “Not just because Egypt receives aid from Saudi Arabia, but rather because they are two important countries in the region.”

Chief editor of Al-Youm Al Sabee Khaled Salah said in an interview that Egyptians go to Hajj and Umra several times, further suggesting that Egyptians should do these religious rituals only once as a measure to save $6bn from going to Saudi Arabia. He added that he is “sad” that there is a disagreement between Egypt and Saudi Arabia.

The relations between Egypt and Saudi Arabia flourished in April following the Saudi’s king visit to Egypt. Saudi Arabia currently supplies Egypt with aid; however, activists from both countries took to the media to reveal opposing stances.