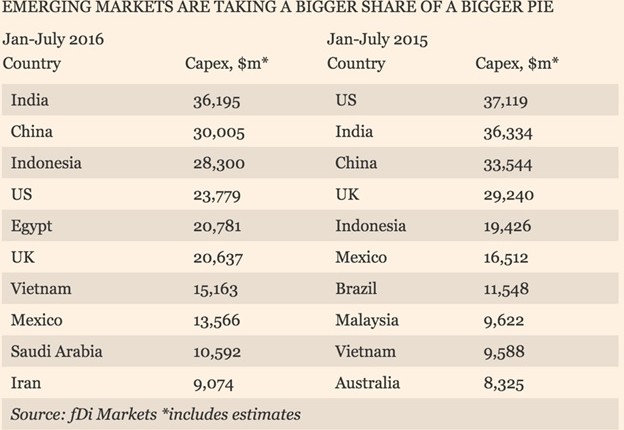 The economic picture brightens somewhat for emerging markets after a period of volatility as eight of the top 10 recipients of Greenfield foreign direct investment (FDI) were developing economies. Between January and July, India, China, and Indonesia beat out the 2015 reigning leader, the United States, which saw its position fall to fourth. Coming in behind the US but in front of the UK was, surprisingly, Egypt.

Despite a foreign currency drought, reduced imports and exports, a private sector that has been in recession for a year, and an exchange rate in chaos, Egypt saw its ranking in global FDI inflows from increase from 15th globally the previous year to fifth place this year. This seems to counter the image of stagnation or recession that reports have been giving, particularly the recent IHS Markit Report, which stated that the Egyptian private sector has experienced a 12-month recession.

The government has made increasing FDI inflows one of its major objectives to supplement the government’s own increase in investment in mega projects designed to attract FDI. On 2 July, President Abdel Fattah Al-Sisi announced he had accepted the government’s suggestion to establish a Higher Council for Investment, in which a number of representatives will constantly improve the investment environment, according to Finance Minister Dalia Khorshid.

According to the 2016 World Investment Report, the Egyptian government amended its Investment Law which they saw as appositive step in increasing investment. The reform was to create “out-of-court forums to settle investor-state disputes and grant incentives for investment in specific sectors or regions”.

The government had allowed the General Authority for Investments and Free Zones to be a one-stop-shop for investors, while other incentives included reduced energy prices; the possibility of partial reimbursement on costs of utilities, technical training, and social security charges; and free or reduced cost land. To qualify for these benefits, investment projects must meet specific regulations.

The primary growth drivers, and thus investment targets, were chiefly the financial industry, which has seen increased growth and expansion since a return to stability. Egypt’s pharmaceutical industry, telecommunications sector, automotive, and raw materials also have become attractive targets for investment.

According to the 2016 World Investment Report, FDI inflows surged by 38% to $1.76tr. Asia was the primary recipient of FDI, in which Asian nations received $541bn out of $765bn in global investment. Investment into emerging markets as a whole is up year-on-year, with $314.9bn of Greenfield investment flowing in during the first half of this year compared with $283.8bn in 2015.

The government aims to raise FDI to $10bn next year: Nasr