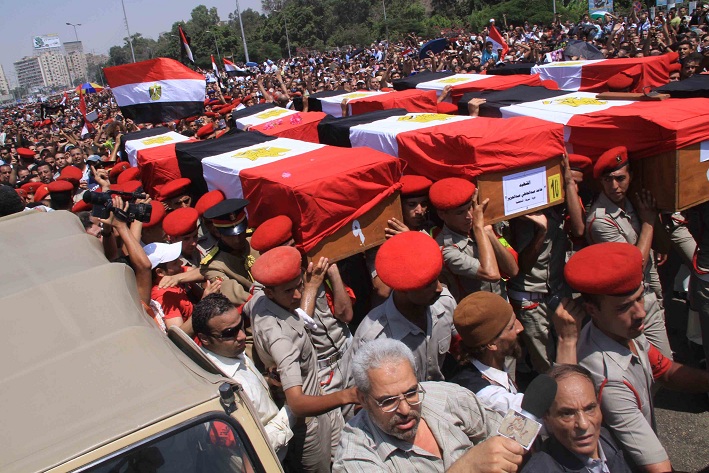 On Friday, Egypt was overshadowed by a state of sadness following the violent and abrupt attack that targeted an army checkpoint in North Sinai and left 12 army conscripts dead and  six others injured.

The incident was confirmed when an official army spokesperson issued a statement detailing the number of those killed and injured.

“[An] armed terrorist group attacked a security checkpoint affiliated to the armed forces on Friday morning using four-wheel drive vehicles. Personnel responded immediately and left 15 terrorists dead and some others injured. The clashes left 12 army heroes dead and six injured. The armed forces would like to stress that these villainous acts will not prevent it from protecting Egyptians,” the statement read.

In a swift show of retaliation, the Egyptian Air Force carried out several air strikes against “Sinai Province” group’s positions early on Saturday. The air strikes were conducted after “accurate” security sweeps and investigative operations with the help of North Sinai’s residents.

According to a second statement issued by the spokesperson, the air strikes targeted the perpetrators of the Zagdan attack, adding that the strike lasted for three hours.

“The air strikes conducted against the perpetrators lasted for three hours and resulted in destroying weapons stores, and bombing seven four-wheel drive vehicles, in addition to killing a number of terrorists who carried out the attack. Operations are still ongoing,” the statement read.

Contrary to the army’s statements, “Sinai Province” issued a statement alleging that its fighters killed 20 army members and returned from the attack safely, without any injuries or deaths.

“Thanks to Allah, number of Caliphate conscripts launched attack on Zagdan checkpoint, affiliated to the apostate army, in Bir El-Abd, south of Al-Arish city. The attack resulted in the death of 20 apostates and the injury of others, all weapons at the checkpoint were seized and all Jihadists returned safely,” the statement read.

The prompt air strikes conducted following the attack raised questions as to whether the strikes were able to accurately target those responsible or not. This incident can be compared to another at the beginning of 2015 when several air strikes were conducted in Libya after the Islamic State (IS) beheaded 21 Egyptian Copts and released a horrific video of the victims being decapitated.

At that time, calls for retaliation came from the public itself. The Egyptian Armed Forces quickly declared that its air forces carried out number of strikes against those responsible and other IS stationing points in Libya. The army statement at the time claimed that the strikes were based on accurate information provided by the Egypt’s General Intelligence Directorate, Al-Mukhabarat, about the perpetrators and IS locales in Libya. While the military response was reported soon after the IS video was release, the actual incident of the missing Copts had been prevalent in the media for at least a month.

In North Sinai, there exists a different problem but the same reactionary response. Army operations against IS-affiliated militants have been ongoing for nearly three years: the militants attack army and security personnel, and so the army responds and so it continues back and forth.

Over the past six months, the army’s violent confrontations with “Sinai Province” militants have become more frequent. Attacks are varying between direct armed attacks on checkpoints or assassinations against army and police personnel. The group has been using improvised explosive devices (IEDs) against armoured vehicles on a near daily basis.

Deaths of state security personnel in these attacks are generally limited in scale. Of course, at times, larger scale attacks have taken place like the attack on Al-Safa police checkpoint in March which left 15 personnel dead. “Sinai Province” issued a statement, claiming that the attack was retribution for Muslim women being subjected to degrading inspections at military checkpoints.

The Zagdan attack also raised questions regarding the readiness of army officers and conscripts in North Sinai and the type of military training they receive, in addition to the weapons they use as compared to militants.

Despite numerous statements issued by high-ranking army officials regarding restoring stability and safety in North Sinai and frequent successful strikes against militants, this video indicates an immense failure by the armed forces to confront attacks.

Several privately-owned media outlets alleged that the militants in North Sinai are able to traverse different locations not discovered by the army, which is why the armed forces are unable to counter them effectively.

Al Bawaba News, a privately-owned newspaper, reported that the three-hour series of airstrikes are the largest, most wide-reaching counter-attack executed by the army in North Sinai since the beginning of the state’s war against terrorism. The outlet reported that 140 militants were killed.

Sinai Province, formerly known as Ansar Beit Al-Maqdis, is a major hurdle for Egypt’s current regime in regaining control of the peninsula as the militant group continuously targets army and police members whom they consider “apostates” that must be killed.

Officer accused of killing worker to remain in detention

Citizen’s body sent for autopsy after explosion in Ain Shams