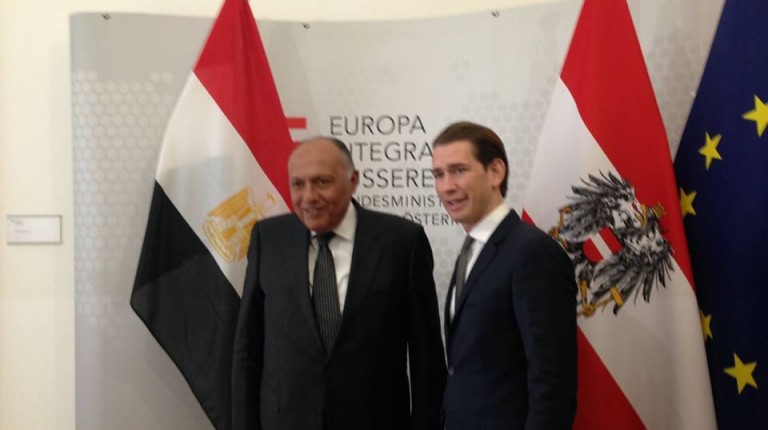 Minister of Foreign Affairs Sameh Shoukry put an emphasis on the strength of bilateral relations between Egypt and Austria, in his opening speech at the Austrian-Egyptian Forum that started on Friday and will conclude on Saturday.

In his speech, Shoukry reviewed the latest development in Egypt during the last period, especially the Egyptian government’s efforts to ensure political stability and security also including efforts to complete the approval procedure for the International Monetary Fund (IMF) $12b loan.

While attending the forum, Shourky met with Austrian chancellor Christian Kern, in which he welcomed the advancement of their bilateral relations following  President Abdel Fattah Al-Sisi’s meeting with the Austrian president in New York during his time at the United Nations general assembly in September.

During the meeting, Shoukry gave the chancellor a letter from Al-Sisi, inviting him to visit Cairo and expressing his gratitude for the invitation to Austria. Kern discussed with Shouky updates concerning the refugee crisis and issues surrounding illegal immigration. Shoukry explained the position Egypt takes on these issues and ways to combat them.

The forum aimed to address ways to strengthen economic and trade relations between Egypt and Austria in various fields, and find possible ways to increase the number of Austrian investments in Egypt.

Senior Austrian officials attended the forum, including ministry and parliamentary representatives, as well as 50 participants from the private sector including the business community and company representatives.

Shoukry to arrive in New York Thursday, prior to UN General Assembly