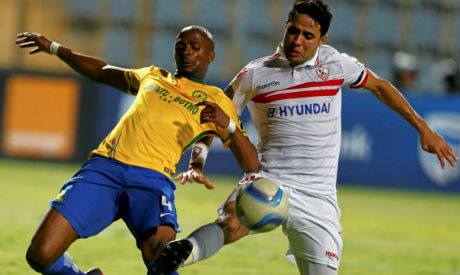 This was the first-leg of the final match of the Confederation of African Football 2016 league championships.

Zamalek lost to Sundowns by 3-0 with goals marked by Anthony Laffor, Tebogo Langerman, and Eslam Gamal, at minutes 31, 40, and 46 of the game, respectively.

The Egyptian club showed a modest performance, with goalkeeper Ahmed El-Shenawy committing several errors that lead to the team’s loss. At the same time, Zamalek’s technical director, Momen Soliman, failed to find out solutions to defend the team against its South African rival.

During the match, Soliman replaced Mahmoud Abdel Razik, known as Shikabal), with Ramzi Khaled to close the left side. After Shenawy was injured, Soliman had to replace him with Mahmoud Gensh.

At the last minutes of the match, Basem Morsy was replaced Mostafa Fathi, hoping to deliver a goal for Zamalek, a hope that failed to be achieved.

The second leg match will be celebrated next Saturday at Borg El-Arab Stadium in Alexandria, Egypt.