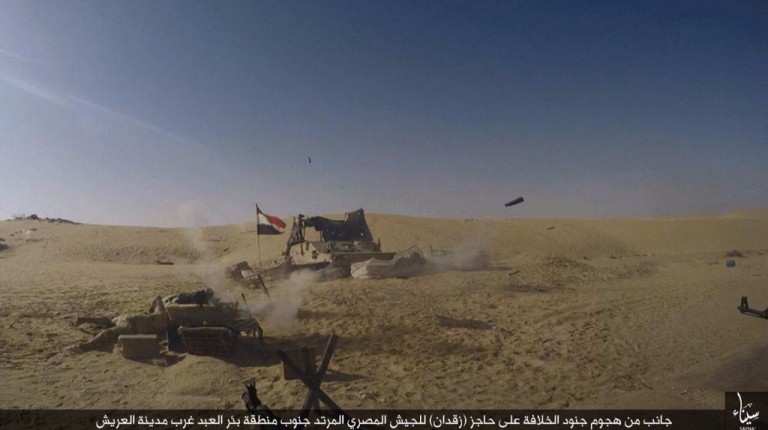 Islamic State (IS)-affiliated group “Sinai Province” published on Sunday photos of an attack that killed 12 army conscripts at the El-Zagdan checkpoint in Al-Arish in North Sinai. The photos came after the Egyptian army spokesperson affirmed that forces stationed at the checkpoint succeeded in killing 15 of the militant attackers on Friday.

The published photos show the North Sinai-based militants firing at conscripts at the checkpoint; one of the photos shows a conscript lying on the ground after being struck by heavy gunfire.

According to the published photos, El-Zagdan checkpoint, located in an empty desert area south of Bir El-Abd in Al-Arish city, was insufficiently fortified, while another shows a tank being struck by a missile. The caption beneath the photos asserts that they depict the attack against El-Zagdan checkpoint.

Following the attack, several foreign embassies expressed sympathy for the families of the deceased conscripts and issued statements of condolences.

The United States (US) embassy in Cairo condemned the terrorist attack against the checkpoint and expressed its condolences in an official statement issued after the attack.

“The US embassy in Cairo condemns the latest terrorist attack on Egyptian security forces in Sinai. We express our deepest condolences to the families of the personnel who were killed, and we wish the injured a speedy recovery,” the statement read.

It added that the US stands with Egypt in its fight against terrorism and in its efforts to build a peaceful, stable, and prosperous future for all Egyptians.

Similarly, British ambassador to Cairo John Casson asserted via Twitter that the United Kingdom (UK) supports Egypt in its running battle against “evil terrorism” and expressed deep condolences to the families of the killed conscripts.

Egypt was overshadowed by a state of sadness on Friday following the violent and abrupt attack.

The incident was confirmed when an official army spokesperson issued a statement detailing the number of those killed and injured.