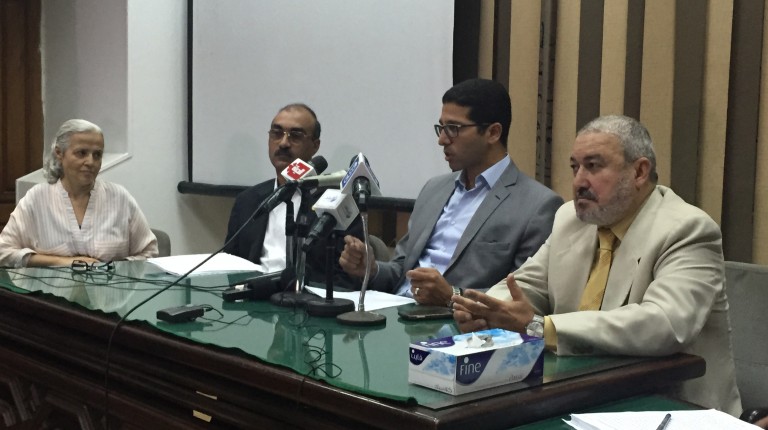 The Doctors Syndicate said in a press conference on Monday that no progress had been made so far to implement the doctors infections allowance increase.

In June, the State Council’s Administrative Court ratified the decision to increase the compensation to EGP 1,000 instead of EGP 19, after the cabinet had appealed the initial verdict. The first meeting held between the cabinet and the Doctors Syndicate was in mid-September.

A committee was then formed to follow up on the process of implementing the raise. This committee includes representatives from the health and finance ministries, and from the doctors and dentists syndicates.

However, the committee’s performance was criticised by the Doctors Syndicate in the press conference on Monday.

“Undoubtedly, the meeting with the cabinet was a great step. But the raise is still in a nascent phase, despite the court verdict, and no progress has been made so far,” Doctors Syndicate secretary general Mona Mina said during the conference.

According to Mina, the cabinet representatives orally acknowledge the doctors’ right to the raise, but they did not formally write down the acknowledgment. She said: “The cabinet urged doctors to take the nationwide economic hardships into consideration.”

Regarding the economic hardships, Mina said: “We have not seen any measures undertaken on the official level to adjust to those hardships like, for example, banning the export of luxury cars or the renovation of the ministers’ offices.”

The syndicate had earlier suggested during the cabinet meeting to allocate part of the budget for the healthcare infrastructure sector to the raise of infections compensation. Every year, there is an extra amount from the infrastructure budget which could be utilised, according to the syndicate.

However, Finance Ministry representative Mohamed Maeet told the syndicate that this budget is reused for investments in other ministries. This, according to Mina, is a violation to the Constitution which urges the cabinet to allocate more budget to healthcare and education.

The syndicate also announced during the conference that it will continue undertaking all legal measures to enforce the implementation of the raise, besides the negotiations, and potentially use legal protesting actions to further push for the raise.

The parliament’s Health Committee member Haitham Al-Hariri expressed his solidarity with the raise by attending the press conference.

Al-Hariri said investing in people is the best kind of investment for any country that wants to rebuild itself. “If we have a rational rule and cabinet, the syndicate would not have taken their demands to the court,” he stated.

The fact that other civil servants get higher monthly infections allowances than doctors, who work on the frontline with patients of deadly viruses, is against concepts of social justice that were raised during the 25 January Revolution, Al-Hariry said.

Over the past three years, at least six doctors have died and dozens of others had been left with long-lasting issues after contracting an infection in their line of work, according to the syndicate census.