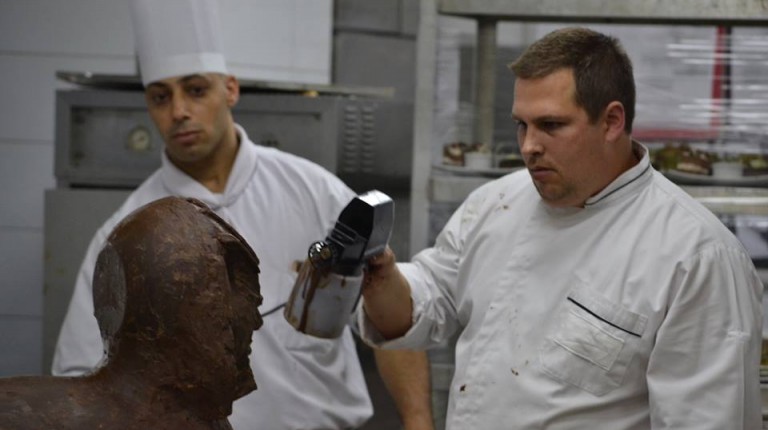 Romain Leemann is a Swiss chocolatier who was born in 1981 in the French-speaking Swiss city of Lausanne, famed for its passion for the culinary arts.

He trained in pastry and baking at Boulangerie Blanc and then at the prestigious Confiserie Mojonnier in Lausanne, where he acquired the knowledge to be a baker, chocolatier, and ice-cream maker.

In 2005, he worked as a production chef at the Confiserie Mojonnier. He then left to Canada, aiming to improve his culinary knowledge, where he met the famous chocolatier Christophe Morel.

Through his work and training at Chocolaterie Christophe Morel, he was selected for the World Chocolate Masters contest.

Now he runs his own company Romain Leemann Chocolaterie in Switzerland, which was established a year and a half ago.

This month, he came to Egypt to participate in the festival des métiers francophones (French-speaking professions festival), which is being held from 16-18 October at the Bibliotheca Alexandrina.

It is the third edition of this traditional festival that is organised by the Centre of Francophone Activities.

On 17 and 18 October, Leemann will hold workshops for children from various schools. He will also prepare a “chocolate corner” at the Hilton Green Plaza Alexandria alongside the hotel chefs.

On this occasion Daily News Egypt discussed the venture with Leemann who highlighted that his journey with chocolate-making began as a job and then became a passion.

He also put an emphasis on the role his mother played to support him during his career. “She always encouraged me. In difficult times, she pushed me forward, and helped me not to focus on the negative stuff,” he said.

On the other hand, and in cooperation with Conrad Cairo, the Swiss Embassy in Cairo hosted a two-day Chocolate Festival at the hotel from 13-15 October.

Leemann was invited by the embassy to host workshops and demonstrations on the art of chocolate making.

On the first day of the festival, a press conference was held where Leemann unveiled a special artisanal creation of a Sphinx sculpture made of 50kg of dark chocolate. Leemann also explained his work and planned activities in Egypt at the press conference.

The following day, during the Conrad’s weekly Friday brunch at Solana restaurant, Leemann hosted an interactive workshop for children. The goal of this workshop was to teach children how to make their own small chocolate creations.

On the last day, he held a private cooking demonstration for adults at Solana restaurant to showcase methods of melting and mixing different types of chocolate, and how to create a delicious and aromatic chocolate desert.

The Swiss ambassador to Egypt commented: “Switzerland is globally renowned for its chocolate industry and we wish to share some of its gastronomical expertise in Egypt. The Chocolate Festival and Romain Leemann’s creations will add a special culinary dimension to the strong Egyptian-Swiss relations … Culture is the best method to bring people from two countries closer.”