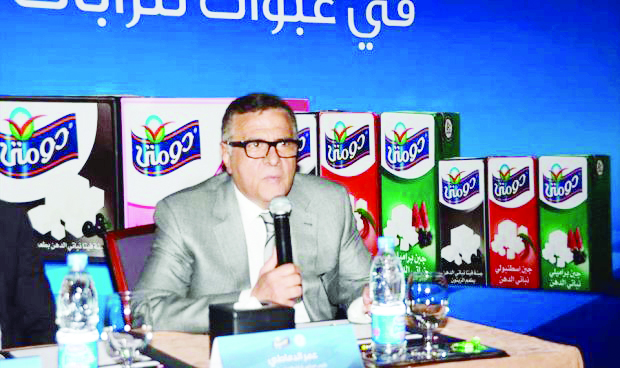 Arabian Food Industries Company (Domty) aims to realise a 20% growth in sales by the end of this year. The company has already achieved a 33% growth in sales over the third quarter of 2016 year-on-year.

Chairperson of the company, Mohamed El Damaty, said in an interview with Al-Borsa, that Domty opened its new juice factory in 6th of October City.

He added that the new plant contributes to the doubling of the company’s production and increases its production capacity to 36,000 tonnes per year.

The new factory is located on a 27,000 sqm plot of land in 6th of October City. Its production capacity stands at 300 million packs annually and provides 500 jobs.

Domty currently operates two factories in the same city and some 2,000 employees, with 26 distribution points nationwide.

The company dominates 40% of the cheese market in Egypt, as well as 7% of the local juice market. It exports its production to the Gulf states, Jordan, Lebanon, Italy, Russia, and eastern Africa.

El Damaty pointed out that the company will open a new bakery line with a capacity of 2 million pieces per month by the end of the year. Moreover, the rumi cheese line will become operative early next year to produce around 3,000-4,000 tonnes per month.

The production of the bakery line will be allocated for the local market, while rumi cheese will partially be exported, especially to Arab markets.

El Damaty said that the company exports 6% of its production, with plans in the pipeline to increase the figure even more as soon as the new factory begins operations.

Moreover, Domty plans to pump investments worth EGP 200m in 2017, most of which will be set to adding to the company’s distribution fleet. The remaining part will be earmarked to buy new machines.

In general, El Damaty said that the food industry is facing a number of obstacles, most notably the scarcity of the US dollar and the high exchange rate, noting that the sector will need a long time to recover and restore previous growth rates.

He added that the food sector, along with all industrial sectors in Egypt, suffers from bureaucracy in obtaining permits and licences.

He pointed out that floating the pound has become a necessity considering the scarcity of the US dollar and the lack of hard cash sources, inducing exports.

He said that the company listed its shares on the Egyptian Exchange (EGX) at a difficult time, especially as prior plans anticipated an exchange rate of EGP 9-10 against the US dollar, yet the exchange rate fluctuations and scarcity of hard cash have made things more difficult.

Moreover, he added that the US dollar shortage contributed to hindering the company’s plans in expanding abroad through cooperating with a foreign company to distribute white cheese in Africa, particularly in highly populated countries, such as Nigeria.

He pointed out that the problem of high sugar prices negatively impacted the company, as the price increased from EGP 3,000 to EGP 7,000 in one month, which led to production problems and low profitability.

“Over 25 years, the company has never faced such difficult challenges,” he said.

The company is now working to restore profitability.

El Damaty said that the dairy and cheese sector includes numerous investment opportunities. He highlighted major international companies prioritising the Egyptian market with aims to invest or increase existing investment. He pointed out major acquisitions during the past years, including Danone and Pioneers.

He explained that the large population of roughly 100 million citizens gives the market high purchasing power, especially as dairy products are indispensable.

Furthermore, he said that the sector does not offer exporting opportunities, as opposed to juices. However, state support could improve the situation.

He called for state support for exports in the food industry, saying that when the government offered more support in 2005, exports doubled.

El Damaty said that Domty was forced to increase the prices of juices in the third quarter of the year, with expectations to increase them, should the price of the US dollar continue to rise.

He stressed the importance of establishing a food safety authority to erode arbitrary decisions, such as the import of wheat from Russia.

He noted that the company aims to expand its exports to Italy, Greece, England, France, and a number of African countries, in addition to exporting cheese to Jordan, Palestine, Saudi Arabia, and Libya.

With regard to exhibitions, El Damaty said that Domty seeks constant participation in the SIAL, Anuga, and Gulfood exhibitions to expand its customer base overseas.

He noted that the company hopes to restore its profitability rates of 2015 in the second quarter of 2017, according to the government plan to reduce the price of the Egyptian pound on the black market, on which the company relies.

He added that the growth of sales over the third quarter this year was driven by increasing the production of white cheese.

He pointed out that the juice factory began production on Thursday, which would increase production capacity by 40%.

Domty’s share increases by 9.35% from offering rate on the initial days of its trading