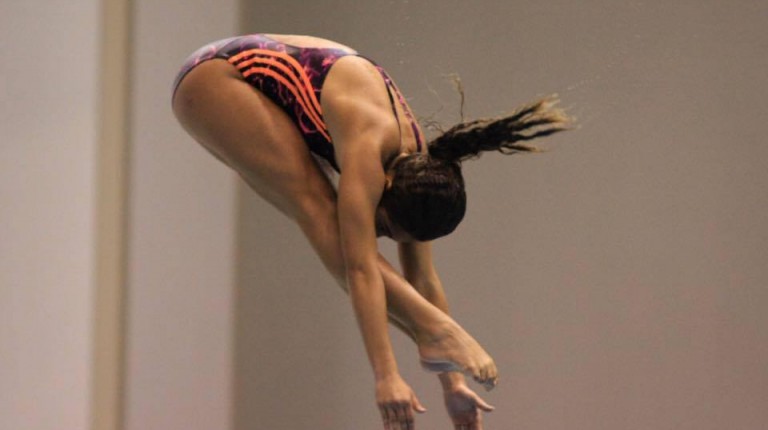 Among the Egyptian delegation to the 2016 Rio Summer Olympic Games was Haidy Adel, representing Egypt in the pentathlon discipline. The 16-year-old Adel was the youngest player in the delegation.

The delegation also included 17-year-old Maha Khaled Amer, who is a member of the Heliopolis Sporting Club and represented Egypt in diving.

Daily News Egypt met with the diving champion to talk about her dreams and how she juggles her education and sports.

One of the most important issues that Amer alluded to in her interview was that the Egyptian educational system does not support sports players, and that it stands as an obstacle in their road to athletic success.

How did you qualify to this year’s Olympic Games?

I was qualified through the 2016 World Diving Cup, which took place last February in Brazil. I was ranked 22nd out of 57 or 58.

I was very happy because I never expected that I would be qualified to the Olympics.

I did not actually believe that I was qualified. It hit me a week before I travelled to Brazil.

How did you train for the World Cup?

I participated in many tournaments. One of them was a friendly tournament, held in the Netherlands.

How did you start the sport?

I started out as a gymnast. The trainer back then told me that I would be good at diving.

I believe that gymnastics is the closest sport to diving, and it turned out that I was better in diving than in gymnastics.

What do you love about diving?

It is never boring and it never feels like a routine. So much can be done, to the extent that I sometimes feel like 24 hours a day are not enough to cover it all.

At the beginning you were practising diving for enjoyment. Did you ever have the intention to be Egypt’s champion in the discipline?

When I was young, I only practiced out of enjoyment. Later, I felt that I could be Egypt’s champion—a goal I achieved later on.

I never expected that I would qualify to the Olympics, but I did.

What was your rank at the Olympics?

What does Egypt need to reach a higher level in diving?

Abroad, players and trainers are offered better capabilities and facilities. The players also have physiological and nutrition doctors, as well as fitness trainers specialised in the sport.

After qualifying to the Olympics and experiencing the atmosphere there, what are your dreams?

I want to reach the finals at the upcoming Olympic events. Of course, my dream is to claim a medal at the Olympic Games, but this is difficult. If I change my lifestyle, I could make it happen. The problem is that my life is divided between school and diving, as if they are two separate worlds.

Is your education an obstacle for your advancement in the sport?

Of course it is an obstacle. At school, they do not do anything in my favour. They do not appreciate that I participate in a sport.

I expected that after being qualified to an important event like the Olympics, their attitude would change, but unfortunately, it did not.

By changing their attitude, I do not mean that I expected to be honoured or something similar. I mean the way they treat me should change.

For example, when I feel tired, and of course there are some days I feel tired after an intensive training, it is not acknowledged.

Of course, there are a few teachers that do appreciate my situation and help me, but at the end of the day, those are individual cases.

What are your upcoming tournaments?

I will compete at a national championship soon at the Heliopolis Sporting Club.

I will also compete at the 21st FINA World Junior Diving Championships in Kazan from 29 November until 4 December.

How are you preparing for this championship?

I train around seven hours daily. On the weekends, I practice for around nine hours.

Sports players with disabilities should not feel abandoned, they are human beings like us: HSC special needs committee