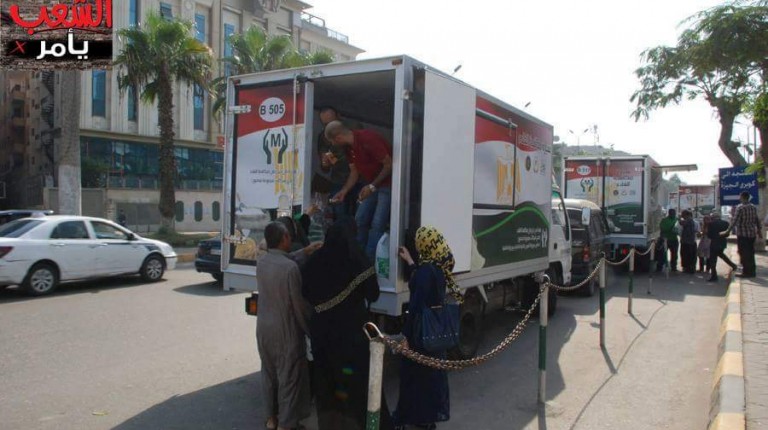 The escalating price hikes are a hot debate in Egypt; citizens are expressing their frustration and worry following the successive price increases across all goods and commodities, especially food commodities, fruits, vegetables, and other durable goods.

In light of the price hikes, Egyptian TV presenter Amr Adib proposed an initiative for companies to reduce their prices by 20% over three months, named Al-Shaab Yaamor (The People’s Command). Of course, initiatives alone cannot completely relieve the burden on citizens, but it was well-received by both companies and citizens alike, resulting in higher profit margins for many of the stores that contributed.

The annual inflation reached 16.4% in August—compared to 14.8% in July—to record its highest level since 2008, according to the Central Agency for Public Mobilization and Statistics (CAPMAS).

Come September, annual inflation had reduced down to 14.6%, and monthly inflation registered 1.3%, compared to 1.9% in August.

The market expects a significant increase in the inflation rate during the upcoming period, following the application of higher electricity prices and the activation of the value-added tax (VAT). This is compounded by the further devaluation of the Egyptian pound, the foreign currency shortage, and restrictions on imports.

Despite President Abdel Fattah Al-Sisi’s continued claims at several events and in TV interviews that there are no price hikes, the cost of living has continued to rise since the last devaluation of the Egyptian pound in March.

Finally, on 26 September, the president conceded that prices have increased; however, he attributed these price hikes to an increase in state bodies’ salaries and pensions without an increase in the volume of offered goods.

It was confirmed that the president’s remarks in his speech are incorrect, as most goods are available at supermarkets, except for sugar and oil; however, people’s purchasing power has decreased.

TV presenter Adib should donate 20% of his salary to the poor in lieu of this initiative: trader

Al-Shaab Yaamor (The People’s Command) is an initiative, launched by famous Egyptian TV presenter Amr Adib during a new talk show programme, to reduce the price of commodities by 20% over three months.

The initiative became a popular among companies, with many food service companies agreeing to reduce their prices by 20-25%, so as to alleviate the burden on Egyptian citizens following the successive price increases.

The following companies are some of those who announced their participation in the initiative.

Beyti reduced the prices of its “Kol Youm” juices and milk and 105g Almarai yogurt by 20-29%, according to managing director Mohamed Badran.

Samir & Aly Stationery Houses decreased the prices of its products by 20% to alleviate the burdens on people’s shoulders.

Procter & Gamble announced a discount of 30-40% on all products on the occasion of 30 years operating in Egypt.

knockmart.com, the first online market of its kind in Egypt, joined the initiative through providing discount rates of 20% and up on 80 commodities starting in November, according to CEO Ahmed Taher.

These companies are looking for free marketing and advertising, as before the initiative they had all raised their prices by 30%, according to deputy head of the Home Appliances Division at the Cairo Chamber of Commerce, Fathy El-Tahawy. According to the initiative, they lowered their prices by 20% and have actually achieved a 10% profit, he added.

El-Tahawy added that no economy is built on initiatives or donations, describing the initiative as “funny”. He noted that home appliance companies did not participate in the initiative because they “didn’t increase their prices just to reduce them again”.

“We, as a division, decrease our prices in the summer and the winter seasons when there is leftover inventory due to high supply and low demand,” said El-Tahawy. “Similarly, home appliance companies and traders can participate in the initiative by falsely raising their prices and then decreasing the prices to the actual consumer price.”

He wondered why pharmaceutical companies chose not to participate in the initiative as it is good marketing and companies do not usually decrease their prices by 20%, but rather increase them.

The companies that did participate called into Adib’s show to detail their experiences. Companies said that even though the prices of some products were decreased by 20%, they saved money usually spent on marketing and advertising (about EGP 50m) as through the initiative they were able to advertise themselves for free, according to El-Tahawy.

He argued that companies cannot decrease the prices of their goods unless the bills and services they pay for—such as water, electricity, gas, and other bills as well as the salaries of officials, ministers, and state employees—decrease as well.

“Why don’t Adib and his colleagues in the media donate 20% of their salary to the poor?” asked Mohammed Wahba, head of the Butchers Division at the Cairo Chamber of Commerce.

Some traders have criticised Adib and his initiative, arguing that he is neither a state official, nor an economist with experience in the market and with prices.

“We as a supply chain don’t seek propaganda or advertise ourselves,” said head of the commercial sector and marketing director at Kazyon, Hafez Ismail. “We often provide discounts on our products, and our sales and discount offers run between 15-25%”.

Kazyon joins these types of initiatives to stablise the prices of essential goods, and Ismail pointed out that the company had previously participated in the president’s initiative to control and decrease prices in April.

Meanwhile, board member of the Federation of Egyptian Industries (FEI), Mohammed El-Bahi, welcomed the initiative, announcing that the FEI would participate in it.

El-Bahi noted that although the president has addressed the issue of price hikes, the state is not responsible for increasing the price for traders before any official increase, whether on domestic or imported products. Therefore, regulatory agencies must play a role in determining the trader’s profit margin in light of the lack of compulsory pricing.

Some traders sell goods to the consumer at about four times the real price, he added.

El-Bahi said that this initiative represents “a noble offer” but needs a mechanism for its implementation to bind all concerned parties [manufacturer, trader, and distributor] to implement the 20% reduction.

Meat and poultry prices increased by 1.8%; milk, cheese, and eggs by 3.1%; and oils and fats by 5.3%, according to statistics from September released by the Central Agency for Public Mobilization and Statistics (CAPMAS).

CAPMAS also noted that sugar and sugary food prices also increased by 5.5% and fruits by 2.1%.

Also in September, cigarettes recorded a significant jump, increasing by 14.8%.

Sugar prices have seen a big jump in recent days, with the supply of sugar in markets dwindling to significant lows.

The sugar shortage in the market comes in conjunction with the application of the Al-Shaab Yaamor (The People’s Commands) initiative. The sugar shortage has worried consumers, eroding away at the hope that sugar will return to its once official price of EGP 5 per pack.

Consequently, commercial chains have been unable to offer sugar in its branches, after not receiving quantities that were scheduled to be offered through the Holding Company for Food Industries or private sector companies.

Abdel Fattah noted that traders actually decrease prices on the third day after receiving the fruits or vegetables, because they are no longer fresh. Unlike other commodities, fruits and vegetables are perishable goods. However, if there is a great demand on the good we don’t decrease the price, said Abdel Fattah.

“We can’t participate in such an initiative because we buy goods at a specific price and we can’t decrease it because this will lead to a great loss. Besides, unlike other commodities, fruits and vegetables prices are not fixed and differ daily,” Abdel Fattah added.

An employee in one of the state agencies, Karima Mansour said that the initiative was applied on non-essential goods, such as soft drinks, juice, and cookies, and did not reduce the prices of certain important commodities, such as sugar, cheese, rice, fruits, vegetables, and meat, and, of course, fish and chicken.

She hoped that the initiative will be applied on the rest of consumer goods and durables.

An employee in a private company, Mohamed Hassan, said that there is importance to eliminating and restricting traders’ monopolies with regards to all goods rather than just launching an initiative without monitoring or following-up on it.

A housewife in Cairo, Om, said that the initiative is a good idea that will contribute to lifting some burdens facing the country, but she needs more companies to become involved in it because cleaners and other food commodity prices are still higher than her budget would allow.

Kazyon to inaugurate more than 100 stores in 2017 across Egypt