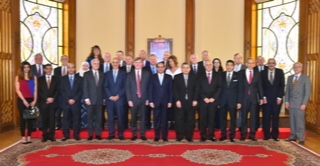 President Abdel Fatth Al-Sisi met on Wednesday with board members of the American University in Cairo (AUC) as part of a delegation headed by chairperson of the Board of Trustees Richard A. Bartlett, as well as AUC President Francis J. Ricciardone.

The president tackled the issue of human rights, asserting that Egypt is a state of law and institutions which value the principles of democracy and human rights in a comprehensive way that includes political and civil rights and freedoms which should be developed, as well as a balance between security and stability.

Al-Sisi further stated that the government is implementing economic reforms, which should also enhance a positive investment environment.

The president further emphasised the role of education in countering terrorism and extremism that spread throughout the region, leading to the refugee crisis.