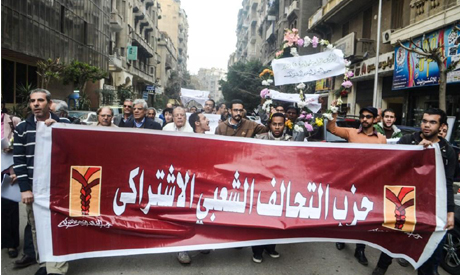 Four democratic parties have decided to boycott presidency-sponsored the National Youth Conference which is scheduled to take place in Sharm El-Sheikh on 25 October, according to a statement released by the Socialist People’s Alliance party (SPAP) on Friday.

Besides SPAP, the Egyptian Popular Current party (EPCP), and Al-Karama and Al-Dastour parties have joined this boycott.

The party members decided to arrange a meeting to discuss their stances regarding the national conference and agreed on boycotting attending it, justifying that the event is a ‘’décor’’ proposing covering people eyes on the country real issues, and it will not agree with their opinions and vision for the state conditions.

‘’There is a systematic attempt to thwart the youths’ goals and to restrict freedoms. Moreover, revolutionary young people have been detained and other martyred for calling for freedom and justice,” head of SPAP Medhat Al-Zahed said during the meeting.

El-Zahed clarified that the most prominent reasons for their boycott is the lack of sincerity on the part of the state in changing its policies; meeting the aspirations and demands of young people in regards to personal freedoms and social justice; and expanding the public sphere.

Youth issues will not be solved by holding a conference that will not look into the young people’s real issues, as every decision to be announced during this symposium will be previously arranged by the state.  These conferences simply aim to ‘’polish up’’ the regime and to gain more support from the people, according the SPAP statement.

The state has closed the public sphere for the youth to express their views and aspirations, as well as resuming the security crackdown against them, the statement read.

Meanwhile, other groups believe that the conference will be an important step for the state’s relation with young Egyptian.

Member of parliament in the Youth and Sports Committee, Mohamed Shehata, said that the conference is an importance measure for connecting the state and young people in order address their aspirations and suggestions. The MP added that his committee will support the conference and asserted that its continuation is significant.

The three-day conference, starting Tuesday in Sharm El-Sheikh, will be hosted by President Abdel Fattah Al-Sisi to discuss a number of issues that concern society, particularly youth issues. High-ranking officials, as well as prominent state and public figures will attend the conference, during which eight workshops and 20 general sessions in political, social, and economic fields will be held.

The boycotting political parties have been politically marginalised and prevented from participating in the political scene since the ouster of former president Mohamed Morsi. Large number of young activists and politicians are held in prison due to opposing state policies and criticising its performance.