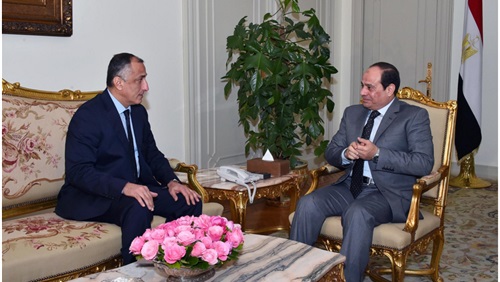 A state of uncertainty over the timing of the devaluation of Egyptian pound by the Central Bank of Egypt (CBE) pervaded the market Sunday, following the meeting held between President Abdel Fattah Al-Sisi, CBE governor Tarek Amer, and a number of senior state officials.

The meeting included the ministers of defence, foreign affairs, interior, finance, and supply, as well as heads of the General Intelligence Directorate (Al-Mukhabarat) and the Administrative Control Authority. Many foreign exchange market observers considered the meeting to be one that discussed preparations to devalue or float the Egyptian pound, as well as adopting other measures to fulfil the preconditions requested by the International Monetary Fund (IMF) in order to receive the first instalments of the $12bn loan.

Recently there have been calls for people to hold protests against poor living conditions, high prices, and shortages of commodities.

The source added that any devaluation or flotation of Egyptian pound would lead to a further rise in commodity prices and increase tensions within the population, noting that the political leadership may object to making such decisions at this time.

Tamer Youssef, head of the treasury at a foreign bank operating in the Egyptian market, predicted that the CBE will cut the value of the Egyptian pound against the US dollar by 20% before the Monetary Policy Committee’s meeting, scheduled for 17 November.

Youssef said that the US dollar is expected to register between EGP 10.5 and EGP 11on the formal market by the end of this year, adding that a further decline in the Egyptian pound’s value is expected at the beginning of 2017.

He pointed out that the state will work on implementing the economic reform programme, which was agreed upon when the IMF’s Executive Board made its decision on lending Egypt $12bn.

Managing director of the IMF Christine Lagarde said early this month that the Egyptian government must implement the agreed economic reforms set in place by the IMF. The reforms include the reduction of energy subsidies and liberation of the exchange rate according to the law of supply and demand in the market, before signing the loan agreement, which was initially approved.

According to Youssef, the meeting held between the president, the CBE governor, and the state officials may be a prelude to the implementation of those procedures.

He added that the government may cut energy subsidies within a few days, and then reduce the price of the Egyptian pound.

He predicted that the CBE would increase the interest rate on the Egyptian pound by about 3% by the end of this year, to meet the expected increase in the inflation rate due to its devaluation.

In Cartoon: The Egyptian pound will no longer be recognised as a valuable currency

CBE ends week without changing price of the Egyptian pound