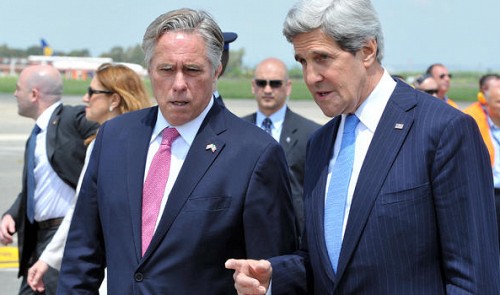 David Thorne, a senior adviser to the US secretary of state, said that the Egyptian administration is able to pass tough economic reforms. He considers the potential “11/11 protests” to be an internal affair.

Thorne’s comments come during a conference held at the American Chamber of Commerce in Egypt, as a US business delegation is visiting Egypt to explore potential investment opportunities.

Thorne explained that these economic reforms face opposition because they will have a negative impact on the lives of citizens.

The Egyptian administration is working to implement reforms, such as a further devaluation of the Egyptian pound, to accelerate the pace of growth for the economy.

Thorne said that the US will vote in Egypt’s favour at the International Monetary Fund (IMF) Executive Board meeting for the loan, as the board has seen a serious political will for reform despite the challenges faced by the country.

He met with the governor of the Central Bank of Egypt (CBE) during the visit. He pointed out that the Egyptian administration is serious about reforming the currency exchange rate, as this is a significant challenge and is not easy to implement.

He said the US administration continues to grant its annual aid to Egypt—about $1.3bn in economic and military aid.

Greg Lebedev, a member of the delegation, said that this visit comes at a very appropriate time, as Egypt is signing for the loan. The presence of the IMF mission at this time sends a positive message to Egypt’s partners and urges them to support Egypt in the signing of the loan.

Khush Choksy, senior vice president of the US Chamber of Commerce for Turkey and Middle East affairs in Washington DC, said that the mission’s keenness to come to Egypt reflects three important points.

The first point is to confirm the return of security and stability to Egypt after three years of turmoil.

The second point is the return of the private sector in Egypt with the coordination and support of the government.

The third point is that there is a serious economic reform programme and the government is determined to implement it.

Topics: 11/11 a senior adviser to the US secretary of state David Thorne protests