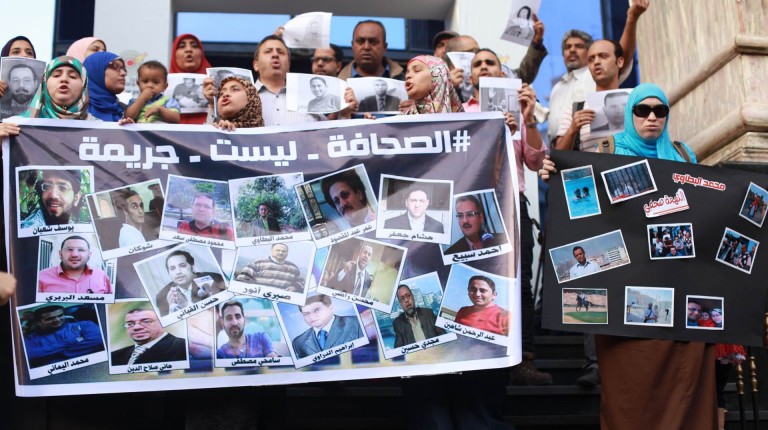 The Journalists Against Torture Observatory (JATO) published on Tuesday a detailed list of journalists who are detained in relation to their work.

There are currently 18 journalists behind bars, some of whom have received verdicts and others whose time spent in remand has exceeded the legal duration of pretrial detention.

The report also lists the charges against them and the location of their detention.

Fouad is a reporter for Karmouz local website who received a three-year prison sentence and a fine of EGP 100,000 on charges of belonging to an outlawed organisation, blocking main roads, and destroying public propery.

He has been imprisoned since 2014 in Borg El-Arab prison in Alexandria.

Abdel Moneim is a reporter for the Tahya Misr website, a pro-government website. However, he is charged with protesting without permission and possessing weapons. He has been detained since 2015 in Wadi Al-Natroun prison.

Meanwhile, more journalists are still behind bars in the phase of pretrial detention. Among them is Ismail Alexandrani, who has been detained for one year on charges of belonging to an outlawed organisation and publishing false news.

Attacks on journalists have increased over the past three years in Egypt.

Nine journalists were killed in Egypt during the course of their work, including foreign correspondents working in Cairo since July 2013, according to international watchdog Committee to Protect Journalists (CPJ). Twelve other journalists were detained whilst reporting in 2014, according to the CPJ census, and hundreds were arrested while doing their work, but are not currently detained. The journalists mostly work for news websites and were detained under no specific charges.