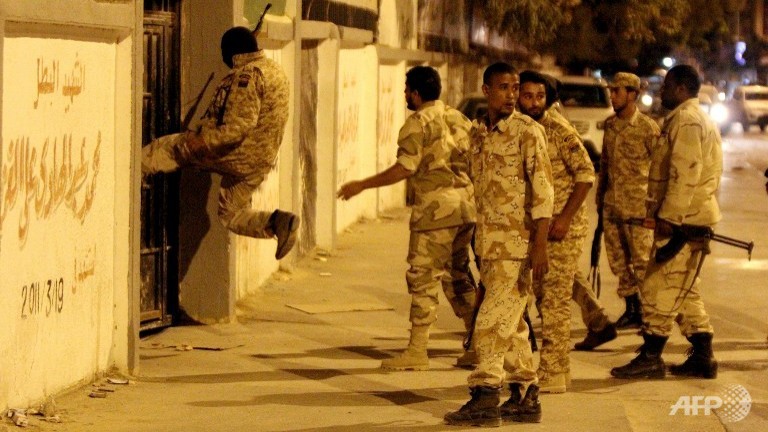 The Arab League published a joint statement, on Tuesday, illustrating the main points covered in the tripartite meeting over the Libyan crisis, which was held on the same day in the general secretariat of the league’s headquarters in Cairo.

The statement mentioned that the three parties advocated for Libya’s independence and its national unity. They also encourage the peaceful resolution of the situation, which “should be led by a Libyan leadership to empower the country to carry out its democratic transition”.

While they emphasised that they refuse any foreign military intervention, they recommended that Libyan security forces to unite under one leading entity as agreed upon in the Libyan Political Agreement, signed last December in Skhirat, Morocco, adding that this should be put as the highest priority.

They recommended a well-coordinated, integrated, and tighter international and regional rapprochement to support Libya through the political, economic, and security challenges that it will face.

Based on the Arab League’s ninth ministerial meeting on 19 October, they agreed to form a triumvirate between the Arab League, African Union, and the UN to enhance cooperation and coordination between the three to promote national reconciliation, push forward the political dialogue, and facilitate the implementation process of the Libyan Political Agreement.

Furthermore, they agreed to work together in reaching out to the major, influential Libyan political parties and talk them into engaging in a political dialogue.

They urged Libyans, the public and the government alike, to furnish their relationship with trust and dialogue in hopes that it will eventually lead to national reconciliation.

The joint statement also mentioned that, during the meeting, all parties condemned the ongoing violence and continued clashes that hold back the much sought after political resolution.

Nonetheless, they support the military efforts to combat the terrorist groups nested in Sirte, Benghazi, and other areas in Libya, according to the statement. The three parties also expressed their support for the presidential council in Libya and its House of Representatives, deeming it as the only lawful legislative authority.

They welcomed all the efforts exerted to bring back petroleum production in Libya and resume the commodity’s exports. They emphasised the need for a uniform and consistent national petroleum foundation that can exercise its responsibilities on all petrol installations across the country, saying that all natural resources in Libya should be utilised equally and transparently for the sole benefit of Libya and its people. Moreover, all the revenues of petrol exports must go through the proper legal channels and a united Libyan central bank should be established to oversee these funds.

They also welcomed the continuing willing of Arab states to support Libya and the work of the special representative of the UN Support Mission in Libya, Martin Kobler, who they believe will lead things to the right directions.

Finally, the parties expressed their determination to do further studies on how to jointly mobilise and coordinate all types of international support and assistance to Libya, which includes the organisation of an international conference, as stated in Article 58 of the Libyan Political Agreement, in a timely manner and when the conducive parties are available.

The Arab League, the African Union and the UN have all agreed to continue the effective coordination between each other through tripartite meetings held periodically in the future.

Egypt to focus on African exports market: head of ECS