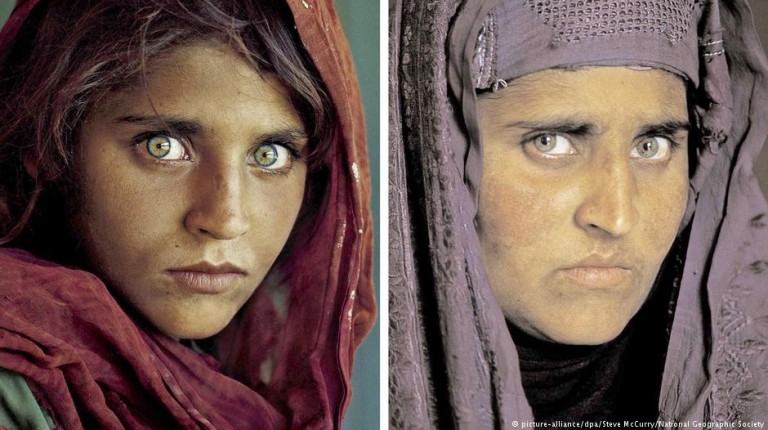 The Afghan woman who posed for photographer Steve McCurry’s famous picture has been arrested by police in Pakistan.

Sharbat Gula was taken into custody on charges of falsifying her identity.The Federal Investigation Agency (FIA) in Peshawar arrested Gula on Wednesday after a two-year investigation of her and her husband. “FIA arrested Sharbat Gula, an Afghan woman, for obtaining a fake ID card,” FIA official Shahid Ilyas told journalists.

He said officials were also looking for three National Database Registration Authority (NADRA) employees who may have had a hand in procuring false identity papers for the woman. They have absconded since the fraud was uncovered.

The Afghan woman’s face became one of “National Geographic” magazine’s most famous and iconic pictures after photographer Steve McCurry captured her face – with its piercing green eyes – in 1984.

At the time, she was only 12 years old and living in a refugee camp in Peshawar after the USSR invaded Afghanistan.

McCurry later found her, after a 17-year-long search, in a remote Afghan village in 2002, where she lived with her baker husband and three daughters.

Millions of Afghans fled to Pakistan after the Soviet invasion in the 1980s. According to the UN Refugee Agency, around 1.4 million Afghan refugees are formally registered within the country and another 1 million refugees live there illegally.

Islamabad has repeatedly been delaying sending them back to Afghanistan, but refugees fear that the government will take the March 2017 deadline seriously. More than 350,000 Afghans have crossed the border into their country this year, according to the UN.