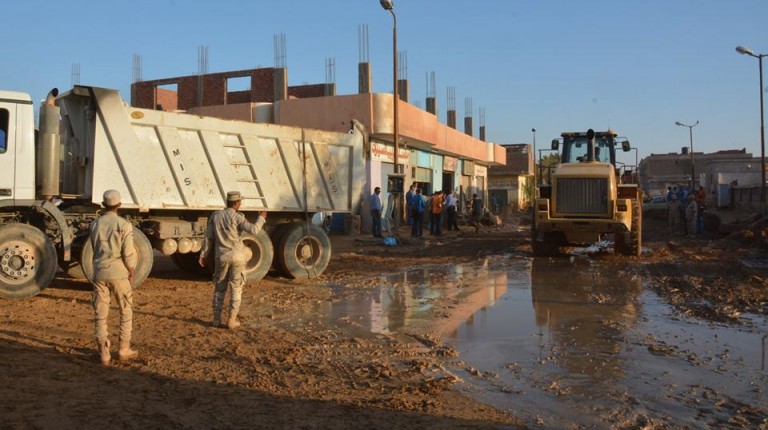 The Egyptian Armed Forces actively participated in rescue operations across the governorates that were hit by heavy rainfall over the past three days, said the army’s official spokesperson Mohamed Samir in statement issued on Sunday.

Flooding left 18 people killed and 72 injured with the most extensive damage in the city of Ras Gharib in the Red Sea governorate. According to the statement, the army moved to provide full support to families that were affected by the flooding there.

“Following instructions issued by the president, the army has moved to provide the equipment and vehicles needed to help remove flood waters and clear away damage. Moreover, 100,000 meals will be distributed to residents of the city,” the statement read.

The president instructed the Ministry of Transportation and the Armed Forces Engineering Authority to review all damaged or destroyed roads and infrastructure as a preliminary step to reconstructing them, according to the statement.

Deaths due to flooding are a yearly phenomenon in many coastal and delta cities in Egypt, which are subject to heavy rainfall throughout the winter season. Poor infrastructure and lack of preparation are largely the cause of these annual casualities.

The casualties continued this year despite several pledges made by the government in 2015 to counteract them. During the last three months of 2015, Egypt witnessed heavy rainfall and flooding in Alexandria and Beheira that caused the death of more than 20 people and resulted in serious structural damage in both provinces.

The situation in these two cities last year forced the prime minister to enact emergency measures for the rehabilitation of irrigation and drainage networks. The president also pledged to allocate funds to rebuild damaged homes, offices, and roadways and support those who were affected by severe floods.