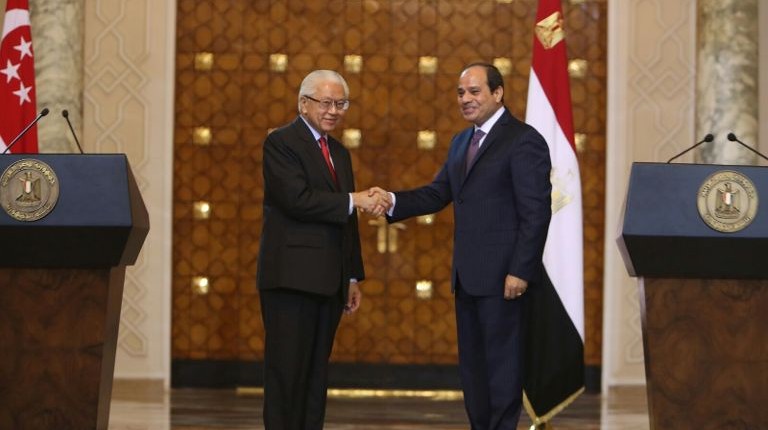 President Abdel Fattah Al-Sisi held a press conference Monday morning in the presidential palace after a productive meeting with Singaporean president Tony Tan, who is currently on an official three-day visit to Egypt to enhance the long-term bilateral relations between both countries.

At the press conference, both presidents delivered speeches about their meeting which focused on ways to develop the commercial exchange between their two countries, as well as addressing several other topics that would require the cooperation of both nations.

Al-Sisi said that discussions with his Singapore counterpart also focused on the Palestinian issue. More efforts must be exerted to enact policy aimed at securing and strengthening the integrity of Palestinian borders, he said in a speech televised live on state-owned TV.

Moreover, he noted that both Egypt and Singapore agreed on continuing commercial exchange and had discussed investment opportunities in Egypt, especially in the ongoing mega-projects, such as the Suez Canal Area Development Project.

The president also discussed with Tan several opportunities for cooperation in energy markets and the possibility of gaining from Singapore’s experience in the fields of transportation and education.

Transitioning to security, Al-Sisi discussed terrorist threats and the wave of Islamic extremism in Egypt, and stated that meeting the Singaporean president was an essential step to coordinate efforts for the sake of eliminating these threats.

“Egypt has faced these threats in all possible ways as they have tried to destabilise the nation with chaotic claims that aim to undermine our society by using the threat of violence. Let me say that Singapore provides an ideal model for achieving harmony and peace in a multiracial society, this model contributed in reaching political and economic stability in Singapore,” Al Sisi asserted.

In turn, the Singapore President said that Egypt is an old and sincere friend to Singapore and mentioned that the economic delegation he is heading is exploring investment opportunities in Egypt.

The Singapore president arrived in Cairo on Sunday night with Lufthansa airlines. He is currently heading a delegation on a three-day visit seeking to promote bilateral cooperation, mainly in the developing ports—a field in which Singapore is already quite experienced.

The timing of the visit came during the 50th anniversary of the beginning of diplomatic relations between Egypt and Singapore, as Egypt was one from the first countries that entered into bilateral relations with Singapore following its independence.