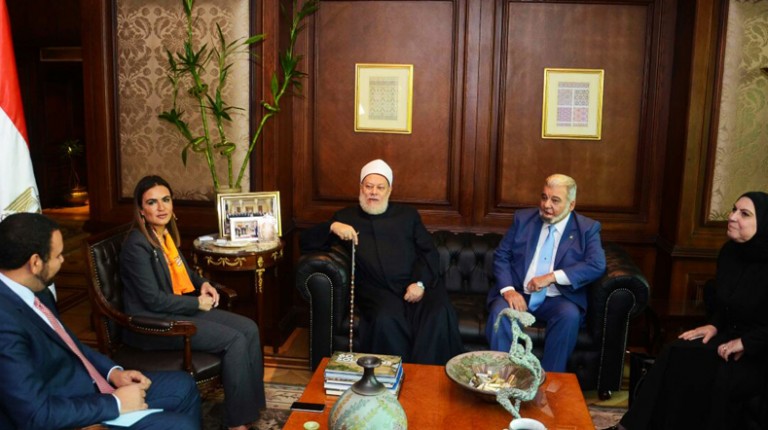 International Cooperation Minister Sahar Nasr met on Sunday with Egypt’s former Mufti and the chairperson of the Board of Trustees at the Misr El-Kheir Foundation, Ali Gomaa, at the ministry’s headquarters. They discussed the progress of establishing several small businesses in the New Valley governorate with funding worth EGP 250m, according to an agreement signed by the ministry and the foundation.

The agreement includes granting loans to young people who intend to begin agrarian-based projects. Each loan is valued at an estimated EGP 75,000 per person, which would be enough to raise 20 heads of cattle. This comes in the framework of an initiative launched by President Abdel Fattah Al-Sisi to provide soft loans for young people, at an interest rate of 5% or less.

They also reviewed the memorandum of understanding (MoU), which was signed between the Social Fund for Development (SFD), Misr El-Kheir Foundation, and South Sinai to establish small livestock projects. The MoU aims to provide six consecutive training sessions for youth in South Sinai province. The total capacity of the projects is estimated at 3,000 cattle and is worth EGP 30m.

Nasr pointed out that the foundation should cooperate with the ministry to limit flood damage. Gomaa said that the Misr El-Kheir Foundation has decided to form an emergency board to deal with natural disasters in Egypt’s governorates, as well as rapid intervention groups, in coordination with managers of the foundation’s offices nationwide. These groups will provide relief and humanitarian aid, including blankets and food. He noted that there are three major rapid intervention centres in Cairo, Sohag, and Aswan to deal with damage created by heavy rain and floodwaters.