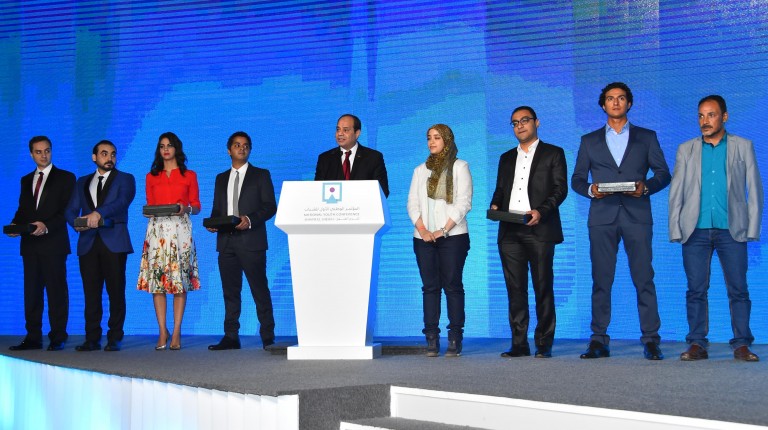 Faced with a drop in popularity, intermittent protests against rising prices, and calls for a mass anti-government demonstration, Egyptian general-turned-president Abdel Fattah Al-Sisi is seeking to appease the country’s youth, soccer fans, and activists with promises of change.

Al-Sisi’s efforts that include a one-time lifting of a ban on spectators attending soccer matches and promises of revisions to Egypt’s draconic anti-Protest Law, as well as a review of the cases of youth detained without trial and monthly meetings with young people to follow up on resolutions of a national youth conference held earlier this month have, however, provoked sharp criticism, even before they got off the ground.

An Egyptian poll reported this month that Al-Sisi’s popularity had dropped 14 percent.

Writing in Al-Masry Al-Youm newspaper, journalist Omar Hadi rejected Al-Sisi’s addressing of young people as his sons and daughters, insisting that the country’s youth were citizens with duties and rights. As the government-organised conference opened, a highlight in Al-Sisi’s declaration of 2016 as the year of the youth, Twitter lit up with young people organising their own virtual gathering.

Hadi’s rejection and the counter conference constituted far more than rejection of Al-Sisi’s brutal repression of dissent and widespread disillusion with the president’s promise of a bright future of social and economic opportunity.

Against the backdrop of severe economic deterioration since Al-Sisi came to power in a military coup three years ago, and the prospect of severe austerity as part of an International Monetary Fund (IMF) bail-out programme, Hadi and the counter conference’s rejection of being sons and daughters amounted to a rejection of neo-patriarchy—the fundament of Arab autocratic rule.

A phrase coined by American-Palestinian scholar Hisham Sharabi, neo-patriarchy involves projection of the autocratic leader as a father figure. Autocratic Arab society, according to Sharabi, was built on the dominance of the father, a patriarch around which the national as well as the nuclear family were organised; between ruler and ruled, as between father and child, maintain vertical relations. In both settings, the paternal will is absolute, mediated in society as well as the family by a forced consensus based on ritual and coercion. At the top of the pyramid resides the country’s leader as the father of all fathers.

The virtual conference raised the very issues the official conference that included sessions on topics such as ‘the relation between public freedom and political engagement of youth’ and ‘the study of the causes of violence in football stadiums and the methods of retaining spectators’ sought to control.

Under the hashtag #Where_Have_All_the_Young_Ones_Gone?, it focused on the detention of tens of thousands, the disappearance of scores of others, the lack of basic freedoms, and the continued closure of stadiums to a soccer-crazy public. A later hashtag ‘why we should have another revolution’ leapfrogged to the number one trend on Egyptian social media.

“If Al-Sisi held the #National_Youth_Conference in prison, there would have been a larger attendance than Sharm El-Sheikh,” quipped tweeter Naga7_Jan25, an avatar that refers to the date in 2011 on which mass protests erupted in which militant, street battle-hardened soccer fans played a key role that led to the ousting of president Hosni Mubarak after 30 years in office.

“Where else are they going to be? They are either going to be buried in the ground, or imprisoned above ground or thrown off the grounds completely,” added Adel Emaldelden.

Al-Sisi told the official conference: “the government, in coordination with the relevant state parties, will study the suggestions and proposals to amend the Protest Law and include them in the set of proposed legislations to be presented to parliament during the current session.”

It was not only youth that Al-Sisi appeared to have difficulty in convincing. Egyptian businessmen warned that raids on sugar factories and traders accused of hoarding the commodity amid a severe shortage would undermine the confidence of foreign investors at a time during which they are crucial in helping Egypt dig itself out of its economic hole.

With the Egyptian Armed Forces opening outlets and military trucks roaming the country selling cheap groceries to compensate for shortages and rising prices, Al-Sisi has promised to reduce the enormous stake of the armed forces in the economy in the next three years.

Al-Sisi suffered a further setback when Saudi Arabia announced it was stopping oil shipments to Egypt. He had irritated the kingdom by refusing—despite massive Saudi financial support—to support Saudi Arabian policy towards Iran, Syria, and Yemen.

As part of Al-Sisi’s fledgling efforts that also included various failed attempts in the past to either repress or co-opt soccer fans, the government announced that 75,000 spectators would be allowed to attend a 2018 World Cup qualifier on 13 November in Alexandria’s Borg El-Arab stadium.

While far smaller numbers have until now been granted entry to stadiums where international matches were being played, pitches have been closed to the public for much of the past five years for all domestic premier league games.

The closure was designed to prevent stadiums from again emerging as platforms for the venting of pent-up anger and frustration.

That anger and frustration has been boiling at the surface in recent weeks with a new group, the Ghalaba Movement or Movement of the Marginalised, calling for mass protests on 11 November against subsidy cuts, rising prices, and increasing shortages of basic goods.

Interior Minister Magdy Abdel Ghaffar, Al-Sisi’s promises notwithstanding, has warned that Egypt’s widely despised security forces would not permit “a repeat of previous attempts at sabotage and social unrest in Egypt”. In a statement on Facebook, Abdel Ghaffar said that security measures were being tightened to “protect citizens and establishments”.

Nevertheless, the publication in Egypt’s tightly controlled media of several incidents of individual protest has prompted speculation that some within the military were sending their former top commander a message that he needs to get a grip on discontent that could spiral out of hand.

The incidents included an Egyptian taxi driver, in an act like the one that sparked the popular revolt in Tunisia almost six years ago and the subsequent uprising elsewhere in the Middle East and North Africa, who set himself alight earlier this month to protest rising prices and deteriorating living conditions.

An Egyptian television station broadcast an outburst by a tuk tuk driver who vented his fury at Egypt’s economic plight. The video clip garnered some 10 million hits on the television station’s website before it was taken down, as well as on social media where it remains accessible.

Large numbers in the Suez Canal city of Port Said, the scene of the worst, politically-loaded incident in Egyptian sporting history in which 72 militant fans were killed in 2012, took to the streets earlier this month to protest the rising cost of housing.

It remains an open question whether mushrooming discontent that is spilling into the open amounts to the makings of renewed mass protests. Many Egyptians look at the horrendous state of post-2011 popular revolt countries wracked by wars and violence such as Libya, Yemen, and Syria, and don’t want to see their country travel that road. Nonetheless, economic hardship and repression appear to be reaching a point at which an increasing number of Egyptians are no longer willing to remain silent.

Dr. James M. Dorsey is a senior fellow at the S. Rajaratnam School of International Studies, co-director of the University of Würzburg’s Institute for Fan Culture, and the author of The Turbulent World of Middle East Soccer blog, a recently published book with the same title, and also just published Comparative Political Transitions between Southeast Asia and the Middle East and North Africa, co-authored with Dr. Teresita Cruz-Del Rosario.